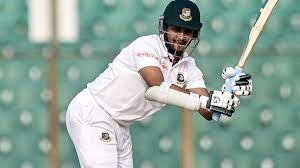 CHATTOGRAM, Bangladesh (AP): Bangladesh opener Zakir Hasan hit a century on his test debut before India reduced the hosts to 272-6 at stumps to take control on the fourth day of the first test.

Captain Shakib Al Hasan was 40 not out Saturday with Mehidy Hasan on 9. Bangladesh needs 241 more runs for an unlikely victory.

The home side was chasing a mammoth 513 to win and resumed the day at 42-0. Bangladesh has never successfully chased down more than 215 runs in the fourth innings.

But Bangladesh got a good start to its second innings from openers Najmul Hossain (67) and Zakir (100). They put on 124 runs — the second-ever century partnership for Bangladesh’s first wicket in a fourth innings.

The openers kept Bangladesh unscathed throughout the morning session before Najmul made a rare mistake by poking a delivery outside of the off-stump against fast bowler Umesh Yadav (1-27).

Najmul, who was out for a golden duck in the first innings, made 67 off 156 with seven fours.

India’s spin then took control with leftarmer Axar Patel (3-50) causing the most damage.

Wrist spinner Kuldeep Yadav (1-69), who wrecked Bangladesh’s first innings, gave India an edge by getting rid of Litton Das for 19, as the batter charged him needlessly.

But Zakir remained untroubled, bringing up some well-judged sweep shots to keep the India spinners at bay. The sweep shot eventually got him his century off 219 balls when he swept Axar behind square for a boundary.

Zakir became the fourth Bangladeshi batter and first opener from the country to hit a century on debut after Aminul Islam, Mohammad Ashraful and Abul Hasan.

He survived four more balls before Ravichandran Ashwin (1-75) dismissed him for his only wicket on the day.

Axar dismissed Mushfiqur Rahim (23) and Nurul Hasan (3) in the same over to inflict a late double blow.

Skipper Shakib Al Hasan played some attacking shots in the late afternoon as Bangladesh saw off the day without further damage.

Bangladesh was bowled out for 150 in its first innings, in reply to India’s 404. India didn’t enforce the follow-on and declared its second innings at 258-2 to set Bangladesh a record target to chase.