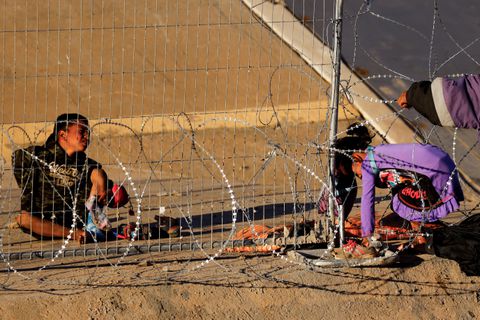 WASHINGTON (Reuters): President Joe Biden is headed to the U.S.-Mexico border on Sunday for the first time since taking office nearly two years ago, tackling one of the most politically charged issues in the country as he prepares for a reelection bid.
Biden on Thursday announced fresh plans to block Cuban, Haitian and Nicaraguan migrants at the U.S.-Mexico border, expanding the nationalities of those who can be expelled back to Mexico, and his visit to El Paso, Texas, is not expected to yield any new policy breakthroughs. Instead, it is meant to demonstrate that Biden is taking the issue seriously, end nagging questions about when he plans to visit the border and shore up relations with Border Patrol, some of whose agents have bristled at the president’s rollback of hardline enforcement policies. The longer-term goal of pushing Congress to pass laws to fix America’s creaky immigration system is unlikely to succeed given Republicans’ newly assumed control of the House of Representatives.
Right-wing lawmakers have repeatedly torpedoed U.S. immigration reform proposals over the past two decades. Biden sent Congress an immigration reform plan on his first day in office. It floundered due to opposition from congressional Republicans, who also blocked his request for $3.5 billion to beef up border enforcement.
Republican lawmaker Jim Jordan told Fox News on Sunday that his party could help the Democrats – but only if Biden adopted the enforcement policies of former President Donald Trump. Those policies included separating children from their parents.
“They’ve allowed now a situation where frankly, we no longer have a border,” Jordan said. Biden, joined by Secretary of Homeland Security Alejandro Mayorkas, is expected to meet at the border with Congressional lawmakers, local officials and community leaders.
Mayorkas on Sunday said two of the key elements leading to increased numbers of migrants making their way to the United States – international crises and legislative stasis – were outside the president’s control. “We are dealing with a broken immigration system that Congress has failed to repair for decades,” he told ABC News’ “This Week” show.
The White House said Biden would assess border enforcement operations in El Paso, where the Democratic mayor declared a state of emergency last month, citing hundreds of migrants’ sleeping on the streets in cold temperatures and thousands being apprehended every day.
U.S. border officials apprehended a record 2.2 million migrants at the border with Mexico in the 2022 fiscal year that ended in September, though that number includes individuals who tried to cross multiple times. Biden on Thursday did open legal, limited pathways into the country for Cubans, Nicaraguans and Haitians. While winning praise from some U.S. industry groups desperate to solve pressing labor shortages, Biden’s moves have drawn criticism from human rights activists and some Democrats who say the new restrictions are a retreat from the president’s 2020 campaign promise to restore historical rights to asylum-seekers.
The policy is likely to trigger legal challenges from both those who favor restricting immigration and advocates for asylum seekers.
After the El Paso visit, Biden travels south of the border to meet with Mexican President Andres Manuel Lopez Obrador and Canadian Prime Minister Justin Trudeau in talks that will also touch on immigration issues.
Americans give Biden failing grades for immigration policy, polls show.