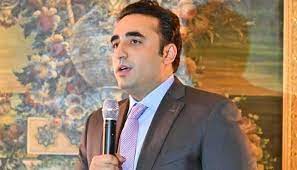 DADU: Foreign Minister Bilawal Bhutto Zardari Tuesday said Tehreek-Taliban Pakistan (TTP) was being funded in Khyber Pakhtunkhwa (KP), while Pakistan Tehreek-e-Insaf (PTI) Chairman Imran Khan had himself admitted reintroducing TTP militants back in the province they were repelled from.

Talking to the media in Dadu, the Foreign Minister (FM) said the PTI government freed the Army Public School (APS) attackers. “Neither the nation nor he will forgive the perpetrators of the APS attack,” says Bilawal. Talking about the devastations of the floods, Bilawal said that the global community aided Pakistan amid the disaster adding that every platform, from the United Nations to the COP27 conference in Sharm-ul-Shaikh, had admitted Pakistan’s losses.

The PPP chief added that the rehabilitation process would speed up after January 9, adding that it was just the start of the rehab process. “Whatever they collect at the International Donors Conference in Geneva on January 9 will be used for flood rehabilitation,” said Bilawal. He said many areas of Sindh and Balochistan were still underwater, and people still needed relief goods such as blankets and clothes for winter.

Bilawal added they would provide stipends to flood-affected people in light of surveys, adding that the affectees would also be given interest-free loans and allotted lands. The government would build an infrastructure that could survive such a disaster in the future. Bilawal added they could not repair such gigantic damage quickly but would hasten the rehab process after January 9. He added that they would build solar and wind energy zones under public-private partnerships in Sindh.

The FM advised the PTI chief to return to the Parliament, saying all his strategies, including two long marches, failed. “Imran’s politics is harming not only him but the country too,” said Bilawal. He added that they could not call for an election because of Imran Khan’s stubbornness and egocentrism.

“The PTI lawmakers claim they want to resign from the assemblies, but they disappear when the national assembly speaker summons them to verify their resignations,” said the PPP Chairman. He added that the PTI chief was marching toward the capital while one-third of the country had been suffering from floods.

Talking about the recent rift with the Muttahida Qaumi Movement-Pakistan (MQM-P) over the delimitation of constituencies in Karachi and Hyderabad, the PPP leader said that they wanted to deal with them according to their agreement. He added that they had disagreements with the MQM-P and would have them in the future, but they were ready to talk to them about anything.