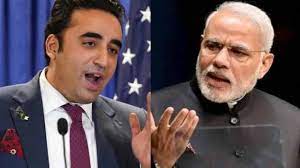 ISLAMABAD (INP): Foreign Minister Bilawal-Bhutto Zardari has defended his recent remarks about Indian Prime Minister Narendra Modi, saying that he was referring to “a historical fact”.
At a news conference inside the UN last week, Bilawal had described Modi as “the butcher of Gujarat,” adding that instead of being punished for the 2002 massacre of over 2,000 Muslims in Gujarat, he was made the prime minister. He was responding to his Indian counterpart S. Jaishankar’s remarks who, for two days in a row, had called Pakistan “the host of Osama bin Laden” and the “perpetrator of terrorism.”
The Indian government had heavily criticised Bilawal’s remarks while workers of the ruling Bharatiya Janata Party (BJP) had staged protests in parts of the country, including outside the Pakistani High Commission in New Delhi. Some workers had also burnt an effigy of Bilawal. In an interview with Bloomberg, the foreign minister said: “I was referring to a historical reality.
The remarks I used were not my own. I did not call I did not invent the term ‘Butcher of Gujarat’ for Mr Modi. The Muslims in India following the Gujarat riots used that term for Mr Modi. “I believe I was referring to a historical fact, and they believe that repeating history is a personal insult,” he said.
“It’s been two days since my remark a member of Mr Modi’s party has announced a 20 million rupee bounty on my head. So, I don’t think the best way to disprove the fact that Mr Modi is the ‘Butcher of Gujarat’ is to adopt such extreme steps,” he said.
Hours after Bilawal reached Washington for talks with US officials, the US offered to assist India and Pakistan in resolving their differences, reminding them that they were key global partners and that America would like to continue ‘valuable partnerships’ with both. State Department Spokesperson Ned Price addressed a news briefing in which he responded to a question about last week’s war of words between Bilawal and his Indian counterpart.
“We have a global strategic partnership with India. I have just spoken to the depth of our partnership with Pakistan. The two relationships stand on their own. It’s not a zero-sum relationship,” he said. The US, he said, sees the importance of maintaining these valuable partnerships with our Indian and our Pakistani friends, adding that they had a relationship in which “we can be friends with both”.