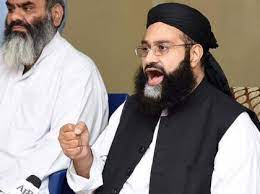 ISLAMABAD: Prime Minister’s Special Representative for Interfaith Harmony and Middle East Hafiz Muhammad Tahir Mehmood Ashrafi on Thursday said Pakistan was a sovereign and independent country with a strong army and wanted positive and stable relations with all Islamic and neighbouring countries.

Commenting on the possibility and resumption of dialogues with India, he said the way of negotiation with India went through Kashmir.

“If India reverses August 5, 2019 status of Indian Illegally Occupied Jammu and Kashmir, there will be a possibility of negotiation on all issues including Kashmir,” he added.

He said the invitation from Prime Minister Muhammad Shehbaz Sharif to negotiate with India is an attempt to bring stability to the region and it should not be taken as a weakness.

Prime Minister’s Special Representative for Interfaith Harmony and Middle East Hafiz Muhammad Tahir Mehmood Ashrafi said the peaceful talks between India and Pakistan could improve things with a possibility to the solution of the Kashmir issue.

Condemning the attack on Pakistan’s security forces at the Pakistan-Iran border, he said Pakistan had given its clear stance to the Iranian government on this incident. Ashrafi who is also the chairman of Pakistan Ulema Council said it was the responsibility of Iran to arrest and hand over the culprits involved in this heinous crime against to Pakistan. (APP)