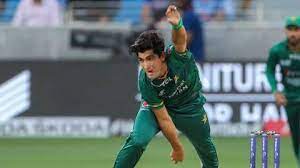 KARACHI: Naseem Shah is not a normal teenager. When the alarm goes off, most hit the snooze button. Perhaps a big night out, maybe too much work, maybe just needing a bit more rest. Hit the snooze button, turn over. Teenagers needs a break.

Naseem might be living out a lot of people’s dreams, but this teenager hasn’t had that luxury for quite some time now. Any fast-bowling slack that has needed picking up for Pakistan has simply been laden onto his slender – and historically vulnerable – back and shoulders. When Shaheen Afridi missed out on Tests due to injury, Naseem became the de facto attack leader. When Pakistan felt a bit light in their white-ball resources, he was thrust into both of those formats, too.

In this age of continuous cricket, the very concept of an off-season feels anachronistic, but perhaps you could trace the start of this interminable Pakistan season to July 2022, when they toured Sri Lanka for a two-match series. Ever since, Naseem hasn’t had a rest. The only reasons he missed games were due to Covid-19, pneumonia and a shoulder injury respectively. When he returned from hospital after that bout of pneumonia, he flew to New Zealand to play three games as warm-up for the T20 World Cup. After he recovered from his shoulder injury during the home Test season, he was back for the final game, sending down more overs than any Pakistan fast bowler.

And, of course, he was also named for the ODI series, starting in Karachi with a five-wicket haul and the Player of the Match Award. Since July 2022, only two fast bowlers – Tim Southee and Mitchell Starc – have sent down more deliveries in international cricket than Naseem’s 1301. But 34- and 32-year-old bodies are much better equipped to handle that sort of workload than 19-year-old ones, especially those that produce such extreme pace. No one else in the top 10 of that list is under 26 (No. 11 is Pakistan’s 21-year old seamer Mohammad Wasim, because of course he is). And Naseem is doing more than just handling his workload.

You can worry about the sustainability, but Naseem is nevertheless dazzling in the here and now. It’s easy to forget, when he was named in the squad for the Sri Lanka Tests, how raw his return to international cricket still was. He had played two Tests against Australia in March, which came after a 14-month period, much of which he spent on the treatment table nursing an increasingly worrisome list of fast bowling-related injuries. It’s easy to forget, when he turned up in Rotterdam in August, that he hadn’t ever bowled an international white-ball delivery, and that when he tormented KL Rahul and Virat Kohli in a famous opening spell in the Asia Cup, he had never played a T20I before.

Anyone who has had the pleasure of watching Naseem through this period – and it has been a pleasure – won’t have been surprised by the clinic he put on against New Zealand on Monday. But it bears repeating that that faith was based on little more than the unshakeable belief that Naseem can do the business anywhere, against anyone, in any format; he hadn’t actually played a Full Member side in an ODI before.

But you didn’t need much more data to know Naseem could take wickets up front with the new ball, or produce that irresistible combination of reverse swing, slower deliveries and just sheer pace to run riot at the death. Because consider what he has been doing this season.

In Sri Lanka, on surfaces so conducive to spin the hosts took a paltry two wickets with their fast bowling, Naseem alone produced seven. Among seamers in the Asia Cup, only Bhuvneshwar Kumar and Haris Rauf took more wickets than him, and that wasn’t even his most iconic contribution to the tournament. At the World Cup, he conceded just 102 in 18 overs during the group stage, the fourth-best economy rate for a fast bowler (minimum five overs). In the semi-final his figures of 4-0-30-0 didn’t quite do him justice as Pakistan’s quicks stifled New Zealand. Those identical figures in the final felt like an outright miscarriage of justice for an extraordinary fast-bowling display against the most gifted white-ball team in a generation. (Cricinfo)