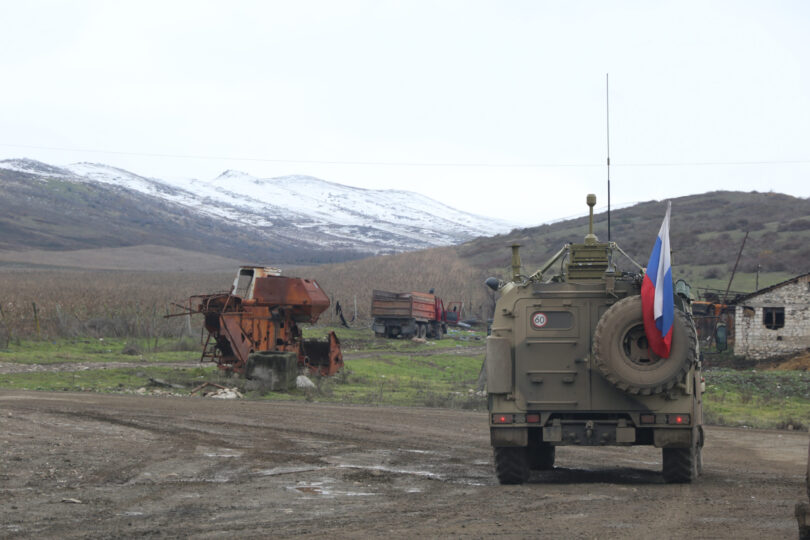 The blockade of Nagorno-Karabakh – a mountainous region internationally recognized as part of Azerbaijan, but under effective Armenian control for three decades – is entering its fourth week. Reports highlight the rapidly dwindling supply of medicine, foodstuffs, and other essentials with seemingly no resolution in sight. Preoccupied with its war in Ukraine, Russia, the region’s historic referee, has shown itself to be either unwilling or unable to end the ongoing crisis.
Azerbaijani self-desc-ribed eco-activists have been blocking the Lachin Corridor, the only road connecting Nagorno-Karabakh with Armenia proper, for almost a month. They are demanding a halt to what they claim are illegal mining practices on Azerbaijani territory, as well as the transfer of weapons (specifically mines) through the corridor.
Officials in the region’s de facto capital, Stepana-kert, have invited international experts to inspect the mines, which they say are operating “in the best standards,” and have rejected Baku’s claims that the road is being used to transport arms. However, Azerbaijan continues to press the issue of arms transfers on the international stage.
These issues risk reigniting the war between Armenia and Azerbaijan, with potentially disastrous consequences for regional stability as a weakened Russia may no longer be able to keep the peace.
Armenia’s Ministry of Foreign Affairs recently warned that “the danger of malnutrition is tangible” for the 120,000 Armenians in the region. Given that 400 tons of essential supplies used to arrive in Nagorno-Karabakh through the corridor every day, the continuing blockade is likely to provoke a serious humanitarian crisis with only a few Red Cross convoys having been allowed to pass through for medical emergencies. The sole alternative means of transportation into Nagorno-Karabakh is an airport located just outside of Stepanakert but is currently being used exclusively for the resupply and rotation of Russian peacekeeping forces.
In addition, the airport, the scene of an Armenian protest late last month, has been out of civilian use for decades, and Baku has threatened to respond forcefully to its potential additional use given that it lies within Azerbaijan’s internationally recognized borders.
The European Union and the United States have called on Azerbaijan to ensure freedom and security of movement along the corridor since the blockade began on December 12. However, the calls have not been backed by any real pressure on Azerbaijan and appear to have had no effect on Baku’s decision-making. Meanwhile, Turkey, Azerbaijan’s staunchest supporter and arms supplier, has blossomed as a global power broker since the war in Ukraine began.
While declining to enfo-rce western sanctions agai-nst Russia and having pl-ayed a leading role (alongside the UN) in producing the grain export deal last y-ear between Kyiv and Mo-scow, Ankara has made its-elf indispensable to the Kr-emlin in certain respects. It appears that Azerbaijan is using the newfound leverage of its ally, as well as its own significantly increased importance in supplying g-as to Europe, to push its in-terests in the South Caucasus.
With Diaspora Armenian groups and some international non-governmental human rights organizations, including Genocide Watch and The Lemkin Institute for Genocide Prevention, having signed a letter laying out the serious potential for ethnic cleansing currently facing the inhabitants of Nagorno-Karabakh as a result of Baku’s actions, the Armenians of the region are concerned for their survival.
At a United Nations Security Council meeting last month, the United States, along with its allies, took a strong stance and called for the opening of the corridor and an end to the blockade. While a statement by the Council was intended to be released following the meeting, it never materialized, following a diplomatic breakdown involving the two parties, France, and Russia. In any event, a humanitarian crisis in Nagorno-Karabakh would pose, at the least, a serious political problem for the American and French governments given the large and politically influential Armenian communities in both countries.
However, Washington does have the ability to influence the situation more strongly. It should apply greater diplomatic pressure on Azerbaijan than it has to date to immediately open the corridor while also coordinating with Yerevan and Moscow to ensure Baku’s concerns are addressed within the bounds of the ceasefire agreement of November 2020. A key interest of both Baku and Ankara is the creation of a so-called Zangezeur Corridor, which would connect Azerbaijan’s exclave of Nakhchivan (which borders Turkey) with mainland Azerbaijan, thus forging a direct link between the two countries, a scenario strongly opposed by Iran and Armenia.
Precisely what force would control such a transportation route, which would traverse Armenia’s southern region of Syunik, has emerged as a point of contention in negotiations following the ceasefire agreement. Meanwhile, Azerbaijan has demonstrated its willingness to exert military pressure to accelerate the negotiations. Given this situation, Washington should encourage further negotiations to advance regional peace and reduce tensions through a diplomatic solution acceptable to all parties involved.
In addition, Washington should seek further action at the UN Security Council to resolve the crisis on the Lachin Corridor within an international framework. However, if such diplomatic actions fail to bear fruit, Washington could support a humanitarian airlift to deli-ver desperately needed supplies to Nagorno-Karabakh.
While limitations do ex-ist on what pressure Wash-ington can apply and what strings it may pull to reso-lve the situation, a clear ne-ed exists for the Biden Ad-ministration to act more de-cisively so as to prevent m-ass famine, or worse, from unfolding in the South Caucasus.