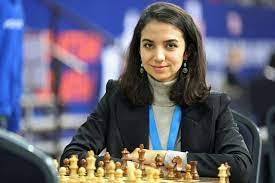 ALMATY (AFP): An Iranian Woman Grandmaster who competed at an international chess event without the mandatory hijab was not representing the Islamic republic, a local federation official said Wednesday.

Sara Khademalsharieh, 25, appeared without a headscarf during this week’s International Chess Federation (FIDE) World Rapid and Blitz Chess Championships in Almaty, Kazakhstan, according to media reports.

Her action is seen by some as a show of support for the protests that have gripped Iran since the September 16 death in custody of Mahsa Amini, 22. Amini had been arrested by Tehran morality police for an alleged breach of the country’s strict dress code for women.

“This chess player participated freely and at her own expense” in the tournament, Hassan Tamini, head of Iran’s chess federation, was quoted as saying by Fars news agency.

“Khademalsharieh did not participate in these competitions through the federation, but went independently and did this action,” he added.

Iranian female athletes are required to abide by the Islamic republic’s strict dress code for women, mainly by covering their heads when representing their country at international events.

“We didn’t expect this chess player to do this because she had participated in the previous tournaments in compliance with the standards”, Tamini said.

Some female athletes have recently appeared in competitions without covering their heads.

Last month Iran denounced a speed skater, Niloufar Mardani, after she attended a competition in Turkey not wearing a headscarf, local media said at the time.

In October, climber Elnaz Rekabi wore only a headband during a competition event at the Asian Championships in Seoul.

She returned to a hero’s welcome at the airport in Tehran, where dozens of people cheered and clapped.

The athlete had apologised over the incident and, in comments to state media, insisted her headscarf accidentally slipped off.

Sport has become a sensitive arena during the protests, with several prominent female athletes and male footballers expressing their support.

The Woman Grandmaster profile picture on the FIDE website shows Khademalsharieh wearing a dark blue headscarf that does not cover all her hair.