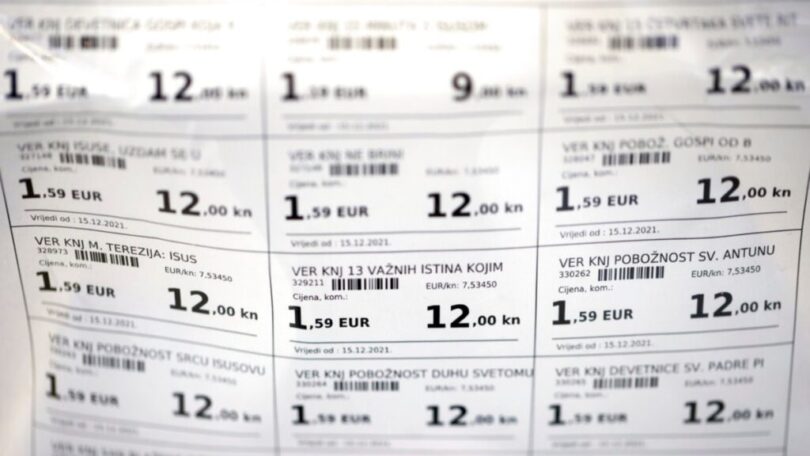 ZAGREB (AFP/APP): Croatia on Sunday switched to the euro and entered Europe’s passport-free zone — two major milestones for the country after joining the EU nearly a decade ago.
At midnight (2300 GMT Saturday) the Balkan nation bid farewell to its kuna currency and become the 20th member of the eurozone.
It is now the 27th nation in the passport-free Schengen zone, the world’s largest, which enables more than 400 million people to move freely around its members.
EU chief Ursula von der Leyen will visit Croatia later Sunday to mark the momentous occasion.
Experts say the adoption of the euro will help shield Croatia’s economy at a time when inflation is soaring worldwide after Russia’s invasion of Ukraine sent food and fuel prices through the roof.
But feelings among Croatians are mixed. While they welcome the end of border controls, some worry about the euro switch, with right-wing opposition groups saying it only benefits large countries such as Germany and France.
“We will cry for our kuna, prices will soar,” said Drazen Golemac, a 63-year-old pensioner from Zagreb.
Many Croatians fear that the introduction of the euro will lead to a hike in prices — in particular that businesses will round up price points when they convert. For tourist agency employee Marko Pavic, “Croatia joins an elite club”.
“The euro was already a value measure — psychologically it’s nothing new — while entry into Schengen is fantastic news for tourism,” he told AFP. Use of the euro is already widespread in Croatia.
Croatians have long valued their most precious assets such as cars and apartments in euros, displaying a lack of confidence in the local currency.
About 80 percent of bank deposits are denominated in euros and Zagreb’s main trading partners are in the eurozone.
Officials have defended the decision to join the eurozone and Schengen, with Prime Minister Andrej Plenkovic saying Wednesday that they were “two strategic goals of a deeper EU integration”. Croatia, a former Yugoslav republic of 3.9 million people that fought a war of independence in the 1990s, joined the European Union in 2013.
“The euro certainly brings (economic) stability and safety,” Ana Sabic of the Croatian National Bank (HNB) told AFP.
Experts say the adoption of the euro will lower borrowing conditions amid economic hardship.
Croatia’s inflation rate reached 13.5 percent in November compared to 10 percent in the eurozone.
Analysts stress that eastern EU members with currencies outside of the eurozone, such as Poland or Hungary, have been even more vulnerable to surging inflation.
Echoing some Croatians who have lamented the demise of the national currency, HNB governor Boris Vujcic said the switch away from the kuna was a sentimental moment for him as well.
But he explained doing so was the “only reasonable politics” for economic reasons.
Early Sunday, Vujcic symbolically withdrew euros from a cash machine in downtown Zagreb.
The kuna was adopted in 1994, during the independence war.
Kuna means marten, a weasel-like carnivore whose fur was used as currency in the Middle Ages.
In recent days customers queued at banks and ATMs to withdraw cash, fearing payment problems during the immediate aftermath of the transition period.
As the clock struck midnight, a series of events were held along Croatia’s borders with its EU neighbours to symbolise barrier-free travel.
Foreign Minister Gordan Grlic-Radman took part in a ceremony at a crossing point with EU member Hungary, where the New Year’s countdown ended with a traffic barrier being raised.
A similar ceremony was held at the Slovenia border, with Interior Minister Davor Bozinovic and Slovenian Public Administration Minister Sanja Ajanovic Hovnik.
“Tonight we are celebrating New Year, new Europe with Croatia in Schengen,” Bozinovic told reporters. “This is the final affirmation of our European identity.”
Croatia’s entry into the Schengen borderless area will also provide a boost to the Adriatic nation’s key tourism industry, which accounts for 20 percent of its GDP.
Previously long queues at the 73 land border crossings with Slovenia and Hungary will become history.
Border checks will only end on March 26 at airports due to technical issues.
Croatia will still apply strict border checks on its eastern border with non-EU neighbours Bosnia, Montenegro and Serbia.
The fight against illegal migration remains the key challenge in guarding the EU’s longest external land border at 1,350 kilometres (840 miles).