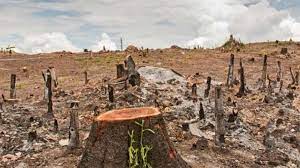 PESHAWAR: Smile is back on the face of 70 years-old Amanullah Khan after his ‘wood taals’ started roaring business in the wake of a significant decline in mercury level during the ongoing harsh cold weather that gripped the Peshawar valley.

Busy like a honeybee in cutting timber of native and indigenous species with a big saw in his ‘wood taal’ with the support of five laborers located at Pabbi station on main GT Road in Nowshera, Amanullah Khan was working against the time to complete orders placed by hundreds of households, tandoors, hotels and marriage halls during the harsh winter.

“The price of one mound (50kg) of firewood starts from Rs 600 to Rs 700 depending on the quality of the timber,” said Amanullah, adding that firewood demand increases manifolds in December-January due to shortage of natural gas and high prices of LPG cylinder.

“We prefer customers from tandoors, hotels, and marriage halls due to high purchase and profit margin because of wedding season,” he said, adding these timbers were being transported from far-flung areas of Nowshera, Charsadda, Peshawar, and Mardan districts after its purchase from farmers on relatively less price than the government’s timber markets.

A visitor can see a large number of cut timbers and even uprooted trunks of trees at wood taals while moving on the main GT Road between Tarnab Peshawar to Azakhel Nowshera depicting the high rate of deforestation in Pakistan, especially in Khyber Pakhtunkhwa.

According to National Forest Policy 2015, Pakistan’s total forest-covered area was five percent and the country was losing about 27,000 hectares of forests per year mainly occurring in private and community-owned natural forests.

The policy revealed that forest resources in all provinces, especially in KP and Gilgit Baltistan were under tremendous pressure, particularly in the communal lands, shamalats, guzara, and privately owned forests.

It said that deforestation in watershed areas has adversely impacted agriculture yield and quantity of water at outlets besides triggering land degradation, and loss of biodiversity, and wildlife in Khyber Pakhtunkhwa. In riparian and coastal areas, especially in Sindh and Balochistan, deforestation amplified floods and facilitated sea water intrusion thus inflicting huge economic losses due to the government kitty as evidenced by the devastating 2010 and 2022 floods.

Comparing Pakistan’s deforestation rate with the world, Dr. Mumtaz Malik, former Chief Conservator of Wildlife KP said that globally around 10 million hectares of forest were deforested every year – equal to the area of Portugal, adding that around half of this deforestation was counterbalanced by re-growing of forests, which means that an overall around five million hectares of the green gold was lost per year worldwide.

“Overpopulation, poverty, and unnecessary trees logging was one of the major causes of deforestation in KP,” said Dr. Mumtaz Malik, adding in 1947, Pakistan’s population was only 37 million that jumped to a record 223 million in 2022 and if it continued growing with such high pace it is expected to touch 260.3 million in 2030 and 330.8 million by 2050 resulting vanishing of the green gold, wildlife, and bees population.

Dr. Mumtaz said that about 68 percent of forests in the country were being used as firewood and 15 percent of trees were being lost due to urbanization and community-driven demands. He warned, “If we do not change our green sector policies and shift to the adaptation of alternative energy resources including solar, hydroelectric, biomass and wind then there was every possibility of losing the existing forests in next two decades besides witnessing frequent climate change’s disasters,” he added.

Dr. Mumtaz said deforestation was a national challenge and there was a need to impose a ‘green emergency’ to conserve and protect the green gold by looking above the party politics. He also suggested an agreement between Pakistan and Afghanistan to control the smuggling of timber.

Wajid Ali Khan, former Minister for Environment and Forests said that thousands of trees planted under the billions tree afforestation project were prematurely cut in Khyber Pakhtunkhwa which was a violation of the agreement signed between the KP forest department and farmers.

Gulzar Rehman, Conservator Forests said that under KP Forest Ordinance 2002, Forest Force has been raised in KP with powers like the police to protect forest resources and conduct operations against the timber mafia.

“The KP forest force was equipped with necessary weaponry, ammunition, vehicles, and a communication system with the power to shoot offenders and timber mafia in self-defense in case of violation of laws.”

The forest officers can arrest, detain or take an accused into custody besides checking any vehicle, boat, railway wagon, or pack animal and seize the smuggled timber.

Gulzar Rehman said that DFOs/RFOs can enter any depot, wood/saw cutting unit, building, or any premises to search and seize timber and arrest offenders besides holding investigation, inquiry and arrest any offender without any warrant from the magistrate.

Gulzar Rehman said the forest force’s jurisdiction has been extended to merged areas where check-posts were also established on national and regional highways and roads to curb timber smuggling. He suggested special forest courts for speedy trial of the accused, an increase in lockups, modern wireless systems, and mobility vehicles imperative to curb timber smuggling.

Muhammad Ibrahim Khan, Deputy Project Director of, the 10 billion tree afforestation project said that deforestation was a major reason for climate change, and about 650.17 million saplings were planted till September 30, 2022, in KP under the project to offset its impact. He underscored the need for early operationalization of the COP 29 UN fund to help climate change and deforested-induced countries including Pakistan. (APP)