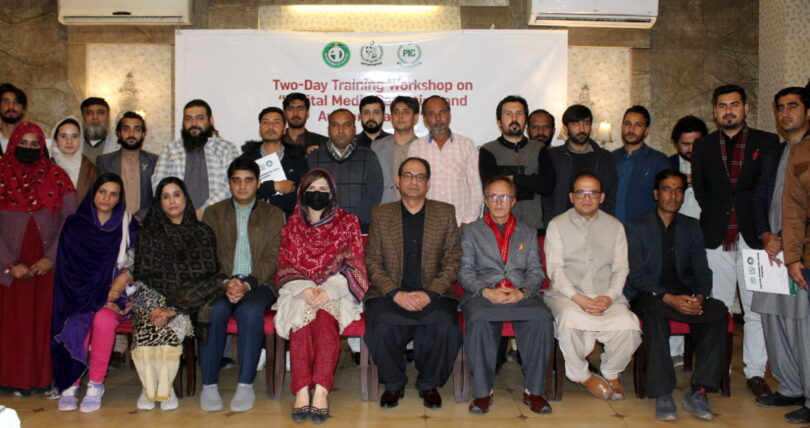 On day two, Mr. Ali Imran Associate Professor of the Journalism Department University of Peshawar shed light on the methods and sources of authenticating digital media news. The participants were engaged in various practical exercises on the spot which is one of the special features of this workshop.

Mr. Faheem a senior anchor person educated the participants about various challenges while reporting and the importance of the credibility of source, followed by an interactive session.

Participants interacted enthusiastically and discussed various issues regarding the dispensation of news to the general public with the responsibility.

Later on, the Chief Guest, Mr. Faizullah Jan Chairman Journalism Department at Peshawar University in his remarks said that the workshop was aptly themed & arranged by Ministry of Information & Broadcasting, PID & PIC and their efforts in this regard are dully acknowledged.

He added that with advancement of communication technology journalism has evolved from centralized to decentralized profession; now consumers of Media has also become producer of news and other content. However, it has also led to the spread of fake news.

He emphasized that journalists need to learn how to use modern technology to effectively perform their professional duties and in the same time counter fake news.

He concluded that such trainings are important because midcareer journalists cannot afford to enroll themselves in universities in order to enhance their skills set.

He added that Ministry of Information & Broadcasting aims at not only enhancing the capacity of young and midcareer media persons but also impart knowledge to meet challenges in the world of Digital Media.

At the end, certificates were distributed among the participants.

The two-day workshop was attended by journalists from various newspapers, TV Channels and student of Journalism Department of university of Peshawar.