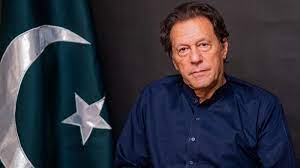 LAHORE: Pakistan Tehreek-e-Insaf (PTI) chairman Imran Khan has said that economic and political stability is impossible in the presence of the current government.

He said that General (retd) Bajwa had hired Hussain Haqqani for his promotion during the PTI government. “Only one person is responsible for the regime change. The dollar rate was at Rs178 during the PTI government. Nobody knows how the dollar rate went up,” he opined. Imran Khan said that PCB former chairman Ramiz Raja was doing good work. “Pakistan reached the final of the World Cup due to decisions made by Ramiz Raja. Now Najam Sethi has been made the PCB chairman. What is his experience in cricket. The PCB needs continuity of decisions,” he added.

Meanwhile, speaking to a private television channel, Imran Khan said on Tuesday audio tapes were being released to blackmail him and malign his image. Speaking to TV, he said conspiracy to oust him as prime minister was hatched inside the country adding Hussain Haqqani was conspiring against him. “What could be more treacherous than installing thieves on powerful positions and quashing cases against them,” he added.

Taking a dig at the incumbent government, he said the incumbent government had ruined all the institutions adding PM Shehbaz Sharif destroyed Federal Investigation Agency (FIA) first after coming into power. “FIA official Rizwan died of cardiac arrest and four witnesses against Mr Shehbaz are no more”, he added. Mr Khan went on to say that the amendments to National Accountability Bureau (NAB) law were helping powerful criminals reign free adding the amendments had given license of corruption to the powerful.

“When the court ordered the NAB to provide evidence of Nawaz Sharif’s ownership of London flats, the government rendered NAB and FIA dysfunctional [to avoid the court battle]”, he added.

He said the appointment of Najam Sethi as the chairman of Pakistan Cricket Board (PCB) would ruin cricket too as Mr Sethi had never played cricket. “Are even Mr Sethi and former PCB chairman Ramiz Raja comparable”, he questioned.