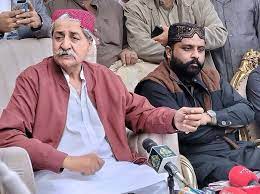 HYDERABAD: The Federal Minister for Commerce Syed Naveed Qamar on Saturday said that general elections would be held after completion of the tenure of the existing assembly. He said that those political elements demanding early elections were also aware of this fact.

Talking to the media in Tando Muhammad Khan district, where he laid the foundation stone for a 9.25 kilometers road, the minister contended that Pakistan Tehreek-e-Insaf (PTI) Chairman Imran Khan wanted to come to power with the establishment’s support. However, Naveed Qamar added that the people of Pakistan had already rejected him. He recalled that the former government which was headed by ex-prime minister Imran Khan made a lending agreement with the IMF with stringent terms and conditions.

According to him, owing to Khan’s economic policies, the government was compelled to go to the IMF. “At present, the National Assembly is witnessing one of the worst moments in history,” he said, pointing towards the PTI’s stance of staying away from the assembly. The commerce minister said even if the PTI’s MNA resign en masse from the assembly, it would be difficult to hold the general elections early.

He maintained that the elected representatives of the people were sitting in the Parliament and the act of trying to dissolve the Parliament by any party would be undemocratic. Responding to a question, Qamar said that the people of Sindh could not fall in the trap of Khan whatever tall claims of conquering Sindh he and his party might make. He believed that Chief Minister Punjab Pervez Elahi was not in control of the Khan.

The minister said that Muttahida Qaumi Movement-Pakistan was an ally of Pakistan Peoples Party and Pakistan Muslim League-Nawaz in the center, adding that it was their responsibility to address concerns of an ally. Commenting on the hike of the wheat support price from Rs 2,000 to Rs 4,000 per maund, the minister said the farmers would directly benefit from the double rate which had been done in view of the massive devastation caused by monsoon rains to the crops last year.

He denied the impressions that the central government was privatizing any government organization. Qamar credited PM Shahbaz Sharif led government for instituting reforms in the economy, saying that if monsoon rains and floods had not caused large-scale devastation, the government would have stabilized the economy. “We will get votes from the people in the next elections on the basis of our economic and other performance indicators,” he said.