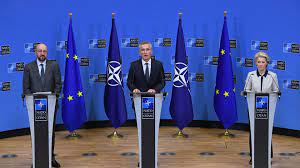 BRUSSELS: Strong allies make strong alliances. The European Union and NATO have evolved and grown in parallel over the years. Our organisations are close, our histories are intertwined. 21 of the 27 EU member states are members of NATO, and 23 if we count Sweden and Finland. EU member states represent the majority of NATO countries. The EU and NATO share the same common values of freedom and democracy, and we share the same goal: peace, freedom and prosperity for our people. Russia’s war against Ukraine has had two unintended consequences:

First, we are stronger. NATO has reinforced its presence in Eastern Europe and it will have two new members: Sweden and Finland. Putin wanted less NATO, but he has achieved the opposite: he will have more NATO and he will have more EU.

We are also getting stronger. We are speeding up the enlargement process with the Western Balkans and we took the historic decision to grant candidate status to Ukraine and Moldova and the European perspective to Georgia. And we are reinforcing our European defence. For the first time in history, we provided lethal military equipment to Ukraine through our European Peace Facility just a few hours after the start of the war. So far we have reached more than €3 billion, in addition to the massive military contributions of our member states. Since day one, we have stood by the people of Ukraine, with strong military, financial, diplomatic and political support. Together, the EU and its member states have contributed nearly €50 billion.

And second, Russia’s war against Ukraine has brought the EU and NATO closer together. In fact, we are closer today than ever. Both our organisations have recently raised our ambition by upgrading our strategies for our future security: the EU Strategic Compass and NATO’s Strategic Concept. Our organisations are complementary – NATO remains the foundation of collective defence and essential to Euro-Atlantic security. And the EU is determined to contribute more effectively to global and transatlantic security.

With today’s declaration, we want to take our cooperation to the next level to ensure peace and stability. And to intensify our cooperation in new areas such as protecting critical infrastructure, space, the security implications of climate change, and foreign information manipulation and interference.

We Europeans want to take more responsibility for our defence, and that also means reinforcing the European pillar within NATO. EU leaders agreed on a clear strategy at our meeting in Versailles last year in March. We developed a strategy to bolster our strategic autonomy and European sovereignty. We agreed to spend more on defence and to strengthen our industrial capabilities by investing more in our defence.

Making Europe stronger makes NATO stronger because strong allies make strong alliances. Thank you again, dear Jens, for your commitment in taking this cooperation forward. You can count on the EU.