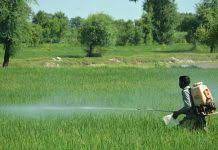 MULTAN: Excessive use of pesticides and insecticides in agriculture poses serious hazards to human health, soil fertility, and the overall environment of the country’s food basket and hub of agriculture in South Punjab.

Both male and female field workers are usually exposed to this phenomenon with 70% population of South Punjab living in rural areas and the majority among them directly associated with the agriculture sector.

According to South Punjab Agriculture Secretariat, around five million farmers, the majority among them women, are used to working in agriculture fields to lend a hand to their men and eke out earnings for fighting abject poverty.

Being frail in comparison with lower immunity levels than men, these women workers are more exposed to pesticide hazards than men due to direct contact with plants of different crops especially cotton as they have to stay at cotton fields for hours during picking season.

The Agriculture Secretariat of South Punjab, a few months back, conducted a survey and then lab analysis to determine the presence of chemical pesticide residue in cotton fields and the results were alarming.

Three parts of cotton bolls (peel, lint, and seed), collected from the pesticides usage fields after analysis at Chemical Pesticide Residue Lab, Kala Shah Kaku, revealed the presence of an abundant amount of Triazophos and Gamma-cyhalothrin in samples.

According to European standards, the permissible residue limit of Triazophos (pesticide) should be 0.01 mg/kg but in Multan’s sample, it was 20.34 mg/kg besides the abundant presence of Gamma-cyhalothrin as well.

Medical practitioners see the lethal impacts on human beings exposed to pesticides and insecticides fearing these people suffer from unconsciousness, lung and liver complications, and cancer if the disease gets chronic.

“There are two complications emerging from excessive use of chemical pesticides – acute and chronic,” said Dr Waqas Arqam. “In the acute form, the farmers become unconscious while spraying or visiting farms soon after spray. In the chronic form, they suffer from lethal diseases lung and liver problems, and finally cancer.”

He said a good number of pesticide-affected patients are brought to emergencies during the cotton season. “Excessive chemical pesticides also cause contact-dermatitis leading to itching, bleeding, infection and many other complications.”

He said, after continuous contact with pesticides the residues start accumulating in their bodies, and a particular level of accumulation, causes cancer, liver complications, and infertility, especially in women farmers. “Sometimes, this poison travels to their stomachs when they eat food with unwashed hands.”

“Women are more vulnerable to this phenomenon that results in stunting growth, liver and breast cancer, infertility, and skin complications,” Dr Waqas said.

He called upon the agricultural department to raise awareness among farmers on the safer use of pesticides and if possible to shift to bio-pesticides to secure crops and human beings from poisonous pesticides.

Although the Central Cotton Research Institute CCRI prepared a cotton picker machine and numbers of farmers are shifting to bio-pesticides under Integrated Pest Management (IPM) plan yet these practices are not very common and scores of poor laborers are still exposed to health hazards.

“Relentless use of chemical pesticide was damaging human health, land fertility, and environment as a whole,” commented Malik Arif, a progressive farmer from Nawabpur. “The cotton picker can be used only on thick cotton crops and we have not yet this culture in our agriculture.”

Therefore, he suggested promoting bio-pesticides on a larger scale and curtailing the use of chemical pesticides for the safety of people and land fertility.

“Promoting the use of bio-pesticides and encouraging farmers by the South Punjab Agriculture Secretariat to opt for it under the Integrated Pest Management model is an excellent attempt,” he remarked.

He said the IPM model remained successful in health security, cutting the input cost and enhancing productivity when it was applied on nearly 500 plots. “But, it can be more beneficial if reaches all the farmers.”

He said farmers can prepare bio-pesticides by soaking “neem tree, aak, kortuma, tobacco, and moringa in specific amount of water for 10 hours and then boiling it. After boiling, more water can be mixed in it and the spray is ready for crops.

Another progressive farmer Muhammad Afzal cultivates chemical pesticide-free crops at 70 acres and was getting handsome production.

“Bio-pesticides and bio-fertilizers had improved the fertility of my land. I get as much produce by using these products as others get by using chemical pesticides,” he said. “Some farmers are in haste for results. But, if they are consistent, they can improve production gradually at low cost.”

He also suggested an aggressive campaign to promote the use of bio-pesticides and to promote organic crops.

Dr Ameen, an official of the agriculture department mentioned efforts being made to promote the use of organic pesticides. “This is a cheaper mode to kill pests. But, as the farmers desire quick results and enhanced production, they hesitate to opt for it.”

He regretted that excessive use of pesticides and fertilizers leaves residues in soil, water, and air and has adverse effects on human health and non-target organisms like pollinators, parasitoids, predators, and wild animals also.

In this scenario, it is direly needed to promote the culture of healthy farming to secure our coming generations and protect our environment. (APP)