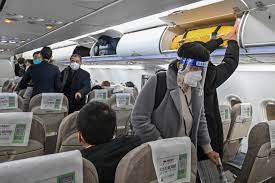 PARIS (AFP): International measures on travellers from China will likely have little effect on containing Covid, health experts said Tuesday, pointing to a surging variant in the United States that may pose a larger threat.

More than a dozen countries have imposed testing requirements on visitors from China, citing concerns about a lack of transparency in Beijing’s infection data and the risk of a new variant of the virus emerging.

China — which is experiencing an explosion of cases after lifting its long-standing zero-Covid measures — has branded the restrictions “unacceptable” and vowed to take countermeasures.

– Why the new restrictions? –

China has officially recorded just a handful of deaths from the virus in recent days — but with the end of mass testing and the narrowing of criteria for what counts as a Covid fatality, those numbers are no longer believed to reflect reality.

Hospitals and crematoriums have been overwhelmed, prompting global concern over the surge in cases.

Countries who have imposed testing measures, including the US and France, raised fears that the huge number of potential cases among China’s 1.4 billion population could allow the virus to mutate into new variants.

Several of the countries have announced PCR tests on arrivals from China, which when sequenced could allow authorities to track possible new variants.

The EU’s health agency ECDC last week called bloc-wide tests on travellers from China “unjustified” given Europe’s high levels of immunity from vaccination and prior infection.

However France, Italy and Spain have already started requiring tests, and EU nations will hold a crisis meeting on the subject on Wednesday.

French epidemiologist Mahmoud Zureik told AFP that such measures were “justified if an unprecedented wave sweeps through the country: it would be difficult to let a plane land with one out of every two people positive without doing anything.”

But he added that for such measures to be useful in Europe, “they should at least be applied throughout the Schengen area” which comprises 27 EU states.

Given that France is currently reducing its sequencing capacity on its home turf, testing arrivals from China seems little more than a “communication” exercise, she told AFP.

“It is not very useful apart from giving the impression that we are doing something,” she said.

Even France’s Covid expert committee, which recommended the government impose Covid screenings, said the measure was unlikely to delay the spread of infections or variants from China.

“The restrictions imposed on South Africa during Omicron’s emergence in late 2021 had very little impact on the outbreak’s evolution in Europe,” the committee pointed out last week.

– Where is the new variant threat? –

In recent months a range of different Omicron subvariants have been competing for dominance across the globe.

Chinese health experts said recently that BA.5.2 and BF.7 are most prevalent in Beijing, both of which have already been overtaken by more transmissible subvariants in Western nations.

So even if they are introduced to Western nations from China, “border controls will not have much impact on these variants,” said Paul Hunter, professor of medicine at the UK’s University of East Anglia.

Rather than looking towards China, many virus experts have their attention on the US and the Omicron subvariant XBB.1.5.

Since mid-December, XBB.1.5 has jumped from under 10 percent of all national cases to over 40 percent, according to the US CDC’s variant tracker.

Hunter said that “the main future concern for the UK at present is the XXB.1.5 variant, which was probably introduced into the UK from the United States and is now increasing”.

Can the variants be kept out?

Tom Wenseleers, an evolutionary biologist at Belgium’s Leuven University, tweeted that random sampling of arrivals from across the globe “would probably be more useful than just checking Chinese travellers”.

“This has not been possible to date in the UK and there is no evidence this is plausible for the UK,” he said.

While there are concerns about XBB.1.5, US virologist Angela Rasmussen tweeted that it was not an “apocalyptic ‘super variant’.”

She pointed to recent research indicating that a booster dose of a new bivalent vaccine would produce neutralising antibodies against XBB.1.5.