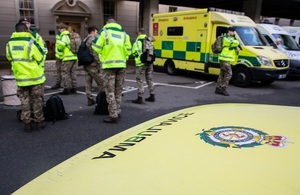 LONDON: More than 1,000 personnel have been trained in recent weeks to provide cover for ambulance trusts, Border Force, and fire and rescue services.

More than 1,000 personnel from across the Navy, Army, and RAF have received training in recent weeks to cover a number of roles during planned industrial action, including passport-checking at the UK border and ambulance driving.

The first industrial action cover took place on Wednesday (21 December) as 600 personnel stepped in to drive ambulances and provide direct support to NHS trusts in England. Further cover will begin today (23 December) as 625 personnel are deployed to ensure the security of the UK border.

I am incredibly grateful for the sacrifices made this winter by members of our Armed Forces, who are giving up their time to keep our essential services running and to bolster UK resilience.

While the unions continue to hold our public services to ransom, it is only appropriate our people are compensated for having to go above and beyond their usual tasks at short notice.

The payments will be issued for each day personnel are training for, or engaged in, industrial action cover during the festive period, following acceptance of Military Aid to Civilian Authority (MACA) requests.

Payments will be made to personnel for every day they spend training or deployed throughout the period of 19 December to 2 January inclusive. Personnel will receive the payments in their monthly salary, with the net amount calculated as £20 for each day of cover, after tax. This will be funded from the Ministry of Defence’s existing budget.

MACA is a long-standing and established process which allows the specialist capabilities of the UK Armed Forces to be utilised to support civil authorities responding to a domestic emergency.

A wider review of how MACA taskings are calculated and charged across Government will take place in early 2023.