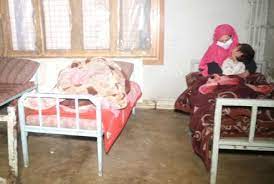 KABUL (TOLOnews): Amidst a campaign to round up drug addicts from the city, at least 10 members of the families of drug addicts, including women and children, were admitted to the 150-bed rehab center in Kabul.
Officials said the families were living under a bridge in the Pul-e-Sokhta area west of Kabul.
“Our team members went to the area and rounded up eight drug addicts and took them to the center,” said Mursal Sadat, social manager of a rehab center.
Zulaikha, the daughter of a drug addict, said she spent one night with her father under the bridge in the area.
“We need shelter. We don’t have a shelter,” said Zulaikha said.
Rukhshana, the mother of Zulaikha, said she lost her three children after her husband got addicted to drugs.
“My youngest child was four years old and I lost him, and my eldest son was five years old and we lost him too,” said Rukhshana, mother of Zulaikha.
Roya, 16, daughter of a drug addict, said she was seven years old when she started using drugs. She also used to sell drugs, she said.
“I was addicted to drugs because of my family and I sold drugs under the bridge,” said Roya.
Officials of the Ministry of Interior Affairs said that they have rounded up more than 10,000 drug addicts.
“So far, we have rounded up 10,000 drug addicts from all over the country. At least 6,500 of them are from Kabul and Herat,” said Abdul Nafi Takor, Ministry of Interior Affairs spokesman.
This ministry said that the process will continue until they collect all drug addicts.
This comes as dozens of drug addicts have lost their lives due to hypothermia in different parts of the country amidst an unprecedented fall in temperature.