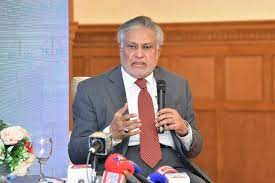 ISLAMABAD: Talking about the rising value of the US dollar in Pakistan, Finance Minister Ishaq Dar has pointed his finger at currency speculation and smuggling of the greenback on a large scale.

The finance minister was speaking at the 2nd Pakistan Prosperity Forum in Islamabad on Wednesday.

He pointed out that the dollar’s value was increasing on the back of currency speculation by some market players and its smuggling to neighbouring countries. He underscored the need to stem these two things.

The minister informed that the government has recently launched operations to check smuggling of foreign currency and other commodities.

“Dollars are being smuggled out from the country on a large scale. During the last 24 hours, our customs department arrested a person on Chaman border who was trying to smuggle $100,000 across the border,” he added.

He said not only the US dollars, but urea is also being smuggled out of the country. He held that there is great difference in prices of local and imported urea.

Lashing out at the policies of previous government, the finance minister said there was an unbearable increase in the country’s debt during its tenure.

“During the last four years, the country’s foreign debts have risen from $30 trillion to $54 trillion. Increase in loans is a very big problem for the country,” he added.

Dar said that the economic management had completely failed during the previous regime.

He said that the foreign lenders must realize that Pakistan is facing a forex currency crunch.

He maintained that the previous PML-N government had completed the IMF programme in 2017 and had reviewed all the economic choices to decrease the foreign borrowing. He said Pakistan was about to join the G20 group.

Enumerating the country’s economic banes, Finance Minister Dar also said that the tax collection has always been a big problem in Pakistan.

He maintained that the government is trying to revive economy. “But we are confronting difficulties in the continuity of policies,’ he added.

He also said they are trying to improve country’s exports.

Ishaq Dar said politics should be kept separate from economy.