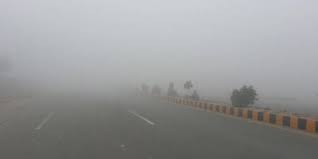 ISLAMABAD: After a short spell of clear visibility, Lahore on Saturday was blanketed once again with fog which led to the closure of several motorways.

The motorways which were shut due to dense fog included: Multan Motorway from Faizabad to Jaranwala; M-11 from Mehmood Booti to Shahdara Kala Khatai Interchange; M-2 from Lahore to Kot Momin; and M-5 from Sher Shah to Zahir Pir.

The air quality of Lahore could not be improved as the city ranked the second most polluted city in the world with its Air Quality Level hovering to 176.

Rain with thunder and snowfall in mountains is expected in Khyber Pakhtunkhwa, Kashmir, Gilgit-Baltistan, Upper Punjab and North Balochistan on Saturday. Weather will remain cold in other parts of the country.

Weather in the last 24 hours: Balochistan, South/Central Punjab, Kashmir, Gilgit-Baltistan and Upper Sindh received rain and snow on the mountains. The weather remained cold and dry in other parts of the country