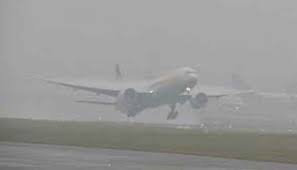 LAHORE: The flight schedule at Allama Iqbal International Airport (AIIA) on Sunday remained affected due to poor visibility and heavy fog in the adjoining areas of the airport.

At least 13 domestic and international flights were cancelled and 15 others were delayed due to the closer of the airport four hours for landing and taking-off of planes. Visibility on the runway was just 50 meters.

Due to heavy fog around the Allama Iqbal International Airport, the runway was temporarily closed for landing and take-off for about four hours.