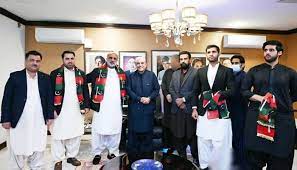 KARACHI (APP): Former President Asif Ali Zardari has said there is a historical relation between Pakistan Peoples Party (PPP) and Balochistan with the former always struggling hard for the rights of the latter.

He was speaking to important political figures of Balochistan, who joined PPP after meeting him here on Sunday.

Congratulating the newly-joined party members, Asif Zardari said that PPP was the strongest actor in the politics of Balochistan, and it would never compromise on the rights of the people of Balochistan.