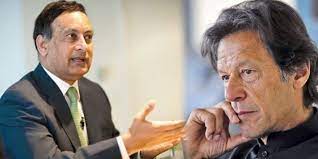 ISLAMABAD: Reacting to Imran Khan’s statement, former Pakistan ambassador to the US, Husain Haqqani has said it was sad that PTI Chairman continues to invoke his name in matters which did not concern him, on Monday.

Yesterday, former prime minister Imran Khan claimed that Hussain Haqqani was hired by Gen (r) Qamar Javed Bajwa for his image building in the US during his government but he being the PM was unaware of this hiring.

In this reply, Haqqani taking to Twitter, wrote:” It is sad that Imran Khan continues to invoke my name in matters which do not concern me.”

He added that it was strange that Imran Khan blames his downfall on someone with no position of power for 11 years, no political party, no army, and no intelligence service.

“Why is research/writing threatening?”

Earlier, Haqqani said those well-versed in diplomacy knew Imran Khan had been lying since day one. There was no truth in the allegations of Imran Khan.

Haqqani said Khan has attempted to make a mountain out of a molehill. It now stood confirmed that this is a strategy of his and he had been lying all along, the former diplomat said.