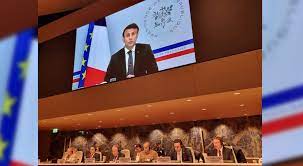 Pakistan and the United Nations are co-hosting the International Conference on Resilient Pakistan which is aimed at marshalling support to rebuild the country after devastating floods.

France will continue to provide expertise and some financial support to the country, Macron said in a video address during the Geneva moot.

The floods, blamed on climate change, dealt a severe blow to Pakistan’s strained economy while displacing some 8 million people and killing at least 1,700. Rebuilding efforts are now estimated to cost more than $16 billion.

An International Monetary Fund (IMF) delegation will also meet Finance Minister Ishaq Dar on the sidelines of a conference in Geneva, a spokesperson of the lender said on Sunday, as Pakistan struggles to restart its bailout programme.

The lender is yet to approve the release of $1.1 billion originally due to be disbursed in November last year, leaving Pakistan with only enough foreign exchange reserves to cover one month’s imports.

“The IMF delegation is expected to meet with Finance Minister (Ishaq) Dar on the sidelines of the Geneva conference to discuss outstanding issues and the path forward,” a spokesperson of the IMF said in a message to Reuters.

A plan laying out a timeline and the financing of the rebuilding effort has been a sticking point in talks to clear the ninth review that will release $1.1 billion in IMF funds and unlock other international funding too.

Dar has been critical of the IMF lately, publicly saying that the lender was acting “abnormally” in its dealings with Pakistan, which entered the $7 billion bailout programme in 2019.

The IMF spokesperson also said its Managing Director Kristalina Georgieva had a “constructive call” with Sharif regarding the Geneva conference and supported Pakistan’s efforts to rebuild.

On the call with the prime minister, Georgieva expressed her sympathy to those directly affected by the floods and supported Pakistan’s efforts to build a more resilient recovery, added the statement.