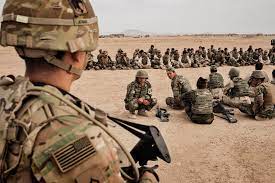 Joe Biden continues to hit anti-records of popularity. January 20 – two years from the date of his assumption of the presidency, half of the term. He fulfilled many campaign promises, but this does not help the ratings. About the intermediate results of Biden’s rule – in the material of RIA Novosti.
People’s dislike
According to January polls, more than half of Americans disapprove of the president’s performance. Only 44% respond positively.
Two years ago, Biden was supported by 53%. Since then, ratings have steadily declined.
He won the election with an extensive socio-economic program. His team tried to sit on two chairs.
On the one hand, they took into account the success of Donald Trump’s populist platform. So, following his slogan “Make America great again,” Biden spoke out in favor of returning the production of goods to the United States. The ambitious “Buy American” plan was to spend $400 billion on developing domestic industries.
On the other hand, Biden actively played on Trump’s weaknesses. In particular, he immediately abandoned odious ideas like building a wall on the border with Mexico, promised to increase corporate tax from 21 to 28 percent and not increase the fiscal burden for those whose income is less than 400 thousand dollars a year.
It was not possible to fully implement the pre-election program. The President had to deal with new problems, which he did not even think about then.
In 2022, inflation in the United States hit a 40-year high of 8.5%. Against this backdrop, Biden pushed legislation through Congress that would allocate $430 billion for health care, green energy, the fight against negative climate change, as well as large subsidies for electric cars.
Ecology is one of Biden’s trump cards. On the campaign trail, he promised to bring the US back into the Paris Climate Agreement, which Trump abandoned.
But there were still difficulties with overseas partners. Now the EU is working on a response to the US inflation law, which directly affects the interests of European automakers. And that’s not Biden’s only foreign policy issue.
US is losing the Middle East
The White House obviously did not calculate the risks of anti-Russian sanctions. Biden intended to compensate for losses in hydrocarbon supplies at the expense of traditional Middle Eastern partners. However, Saudi Arabia and the United Arab Emirates did not agree to play by American rules. In March, the Arabs did not want to discuss with Biden the increase in oil production in order to contain the rise in prices. A few months later, the US president visited the Middle East, but his personal visit was not crowned with success either.
Things are no better in the Iranian direction. Washington verbally still intends to revive the nuclear deal with Tehran. However, the Iranians are demanding the lifting of sanctions, which the White House is clearly not ready for.
From Afghanistan to Ukraine
Following in the footsteps of former boss Barack Obama, Biden decided to end the Afghan venture. The exodus of Americans from the Central Asian country was perceived ambiguously in the world.
The Taliban seized power in Kabul. This dealt a heavy blow to Washington’s reputation. And Biden took advantage of the Russian special operation in Ukraine to shift the foreign policy focus.
The White House does not even hide this. The other day, Biden’s national security adviser Jake Sullivan frankly stated that the withdrawal of troops from Afghanistan made it easier to help Ukraine.
Support for the Kyiv regime, coupled with anti-Russian rhetoric, is most welcome for Biden. It was on the confrontation with Moscow that a bipartisan consensus was formed in Congress. It is significant that in the midterm elections, when everyone predicted a victory for the Republicans, the Democrats retained control over the upper house – the Senate.
However, these successes do not cancel the claims against Biden that ordinary Americans and political opponents have accumulated.
Age is a hindrance
Opinion polls show that the US population is not least concerned about the president’s physical and mental health.
Reasons for excitement enough.
For example, during the traditional Easter reception in the spring of 2022 on the White House lawn, Biden was frightened by an animator in a bunny costume. After one of the performances, he “shaked hands” with the void – there was no one around at that moment.
And this is only a small part of the embarrassment. The head of state called Ukrainians Iranians, read clues from a teleprompter, fell off a bicycle and on an airplane ramp, addressed the late congresswoman, and once “promoted” his deputy Kamala Harris to the post of president. Such “fails” gave rise to many memes, and reservations like the story of meeting his 12-year-old wife were scattered into quotes.
At the same time, the Democrats do not have a “bench”. Now Biden is 80. If he still goes for a second term in 2024, he will leave the post at the age of 86. Before him, Trump was the oldest head of the United States.
At the end of last year, a medical examination of the president was hotly discussed on American social networks. His administration so stubbornly endured the standard, routine procedure that even within the ranks of the Democrats there were proposals to change the leader. Moreover, the Republicans, unlike the Democratic Party, already have politicians who are seriously contending for election in 2024. For example, 44-year-old Florida Governor Ron DeSantis. And if Biden’s age difference with Trump is not critical (only four years), then the current leader may not survive against a young rival.