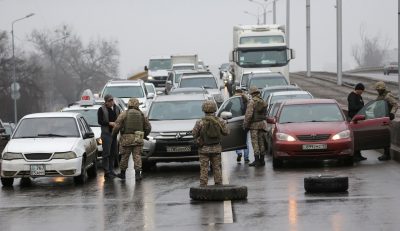 Political turmoil and uncertainty beset Central Asia in 2022. Kazakhstan, Kyrgyzstan, Tajikistan, Turkmenistan and Uzbekistan faced domestic, regional and international challenges exacerbated by the war in Ukraine. This brought into sharp relief both the systemic threats to peace and stability on the ground and regional authoritarian governments’ capacity to placate if not eliminate them.
Regime survival was tes-ted in Kazakhstan when vi-olent protests rocked the c-ountry in January last year. Kazakh authorities classifi-ed the events as a coup at-tempt. The government all-eged criminals and terrorists, at the behest of security chiefs close to former president, Nursultan Nazar-bayev, carried out the violence.
Kazakhstan’s current President, Kassym-Jomart Tokayev, spent the rest of the year shoring up his power. He first held a constitutional referendum in June and then called snap elections in November, which he comfortably won. Despite talk about the dawn of a ‘new Kazakhstan’, featuring true democracy and social justice, Tokayev’s actions were aimed at dismantling Nazarbayev’s power and legitimising his rule until at least 2029.
Turkmenistan, instead, witnessed a smooth power transition between two presidents in March 2022. This was due to the dynastic nature of the change: former president Gurba-nguly Berdimuhamedow passed on the baton to his son, now President, Serdar Berdimuhamedow. Yet the new head of Central Asia’s most closed state inherited a slew of socioeconomic issues including food shortages, unemployment and skyrocketing inflation. If prices for natural gas — Turkmenistan’s main export commodity — fall, the regime may find itself in dire straits.
Tensions between central and regional authorities were the main source of domestic instability in Tajikistan and Uzbekistan. Tajikstan grappled with protests in the fractious Gorno-Badakhshan Autonomous Oblast, while Uzbekistan dealt with civil unrest in Karakalpakstan. The use of force restored order in both instances yet the regimes failed to address the root causes of the rumblings in these periphery regions.
Longstanding cross-border conflicts over land, water and state boundaries also simmered in 2022. Border clashes between Kyrgyzstan and Tajikistan in the Ferghana Valley left hundreds dead and wounded and led to mass population displacement. The final demarcation of the Kyrgyz–Uzbek border negotiated in October last year may have improved bilateral relations but it also precipitated resentment and resistance in Kyrgyzstan.
Meanwhile, Afghanistan remained a source of security threats to all Central Asian countries. Besides Tajikistan, Central Asian countries tried to normalise relations with the Taliban government to help stabilise Afghanistan and rein in international jihadi gro-ups targeting Central Asia. Regrettably, cross-border attacks and propaganda and recruitment activities from Afghan territory increased over the year. Tajikistan fortified its southern border adjacent to Afghanistan and began a military modernisation program. China, while increasing military–security assistance to Central Asian countries, did not move to dislodge Russia as the main security guarantor in the region.
There was also positive news for Central Asian reg-ionalism last year. In July, the leaders of five states met at the 4th Consultative Meeting of the Heads of Central Asian States in Cholpon-Ata. Kazakhstan, Kyrgyzstan and Uzbekistan signed an agreement on regional cooperation at the summit, while Tajikistan and Turkmenistan asked for more time to consider the document. Apprehension about Kazakhstan and Uzbekistan as potential ‘big brothers’ still prevents tangible collaborative projects in the region.
The conflict in Ukraine affected Central Asian countries’ global relations. They tried to stay neutral in the unfolding confrontation between Russia on the one hand and Ukraine and its Western allies on the other. Kazakhstan’s foreign minister, for instance, repeatedly stated that his country would neither join the sanctions against Moscow nor help Moscow bust them.
The Russia–Ukraine war also increased the strategic and economic value of Central Asia to Russia. Although the Kremlin did not push for loyalty from the countries that are nominally its allies and friends, it was content to see the region as a breach in the wall of international isolation and a reliable commercial partner.
In 2022, trade between Russia and the Central Asian republics grew impressively. This ranged from 22 per cent in the case of Tajikistan, to 42 per cent in the case of Kyrgyzstan. Russian President Vladimir Putin visited all five countries during the year and took part in a summit with Central Asian countries in October, promising more Russian infrastructure investment. Tajikistan’s President Emomali Rahmon also demanded more attention and respect from Moscow at the summit, though Putin stated that relations between the Kremlin and Central Asian republics would never follow the Soviet pattern.
The European Union also engaged in diplomacy with Central Asia last year. Visiting Kazakhstan after Putin in October, European Council President, Charles Michel, discussed with President Tokayev how to mitigate the unintended consequences of EU sanctions on Russia on Kazakhstan’s economy. In December, the EU foreign policy head, Josep Borrell, hinted that the region could receive part of a 300 billion euro (US$323 billion) connectivity development budget. This referred to a transport route connecting China to Turkey dubbed the ‘Middle Corridor’, bypassing Russia and going across the Caspian Sea.
Geopolitical competition, regional tensions and the maintenance of authoritarian regimes, including the dynastic transition in Tajikistan, will be the main stories to watch in Central Asia in 2023.