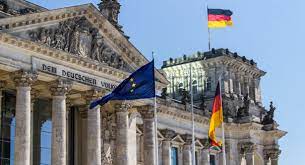 New Western commitments to deliver combat vehicles to Ukraine are putting Berlin on the spot. To prevent Russia from further destabilizing Europe, Germany must forge a special Europapolitik.

Shouldn’t Germany be over the crossroads by now?

Ever since Russia invaded Ukraine nearly a year ago, Chancellor Olaf Scholz’s coalition government has been divided and confused over how to respond to the war taking place along the EU’s eastern border.

Berlin has provided Ukraine with military equipment, substantial financial assistance, and has given refuge to millions of Ukrainians fleeing the war.

And Scholz, after so much pressure from the United States and Berlin’s allies in Central Europe, dumped in February the controversial Nord Stream 2 pipeline. That gas pipeline epitomized the special, close ties between Berlin and Moscow that originated decades ago.

Germany’s Ostpolitik, or eastern policy, was not only about trying to use trade to influence the behavior of the former Soviet Union. Germany’s political elites, whether they were the Social Democrats, the Christian Democrats, or the liberal Free Democrats, believed Ostpolitik was about maintaining stability during the Cold War.

That stability was based on the division of the continent; on the Kremlin occupying Eastern Europe and denying them their freedom and independence. For the architects and ideologues of Ostpolitik, this was a price worth paying.

When the independent Solidary movement in Poland tried in 1980 to question that stability by openly challenging the communist regime with nation-wide strikes and protests, it received little support from left-wing parties across Western Europe. Solidarity was challenging Western Europe’s and particularly West Germany’s conception of stability.

Even when the Berlin Wall was torn down in November 1989, Germany still clung to Ostpolitik. Even when Russia invaded Georgia in 2008 and Ukraine in 2014, Berlin’s view of stability of the European continent as being tied to Moscow did not change. Only with Vladimir Putin’s invasion of Ukraine nearly a year ago did Germany finally question this view and come to recognize that Russia itself is destabilizing Europe.

Germany’s Social Democrats as a whole have not made the leap away from Ostpolitik to a Europapolitik that would change the direction of the EU’s foreign and security policy.

It was hoped that Scholz’s seminal Zeitenwende speech delivered soon after Russia started bombing Ukraine, on February 27, 2022, would do just that. It was a remarkable speech; it pledged to support Ukraine, to supply it with weapons, to defend its independence. Yet the speech didn’t explain what the war meant not only for European security but Germany’s role in Europe.

This is the crux of Germany’s position on the war in Ukraine and its position in Europe: the ambiguity toward Russia and the reluctance to politically lead Europe.

Since his Zeitenwende speech, Scholz has twisted and turned over providing heavy weaponry to Ukraine, recently promising the delivery of Marder infantry vehicles but refusing to send Leopard tanks, repeating his mantra that Germany cannot go it alone.

This is procrastinating. NATO allies are working together and explaining how individually they support Ukraine. Even France has changed its stance: President Emmanuel Macron on January 4 said he would provide armored combat vehicles and armored personnel carriers to Ukraine. This is a major shift for Macron who often made controversial statements suggesting for example that Putin should not be humiliated.

As for Germany, Scholz has been unable to articulate a clear line toward Ukraine, unlike his Green foreign minister, Annalena Baerbock. He won’t exert his authority over his Social Democratic Party. One faction opposes the delivery of heavy weapons on the grounds it will escalate the war, as if Russia hasn’t been escalating it since it began its invasion. Another clings to Ostpolitik and the need for diplomacy with Russia to negotiate the end of the war. Yet another is pacifist and clings to the Cold-War version of stability and the legacy of World War II.

The reality is that the war in Ukraine is spurring instability and forging dangerous new alliances. Iran is supplying Russia with drones to bomb Ukraine. Russia is relying on China’s support. New kinds of warfare and military groupings such as Russia’s Wagner group are in Ukraine. France saw first hand the disruption and brutality exercized by the latter in Mali.

EU governments have been slow to grapple with this instability on Europe’s doorstep. This is because the twenty-seven member states see stability differently. Unlike Germany and France, East Europeans do not view Russia as essential for European stability. For them, the stability and peace brought about after 1945 was coercive, totalitarian, and imposed. Russia’s war in Ukraine highlights these differences in member states’ experiences.

Which brings us back to Germany.

The war in Ukraine should give Berlin the opportunity to intellectually and politically forge a Europapolitik. It could be a chance to protect Europe’s stability—and that includes Eastern Europe—by having a security and foreign policy to complement NATO. It would mean Germany providing much-needed leadership to the EU as well as support for NATO. It would require Germany to act as a strategic player—not as a reactive one that has been clinging to anachronistic assumptions about Russia and Eastern Europe.

The war in Ukraine has upended those assumptions. It is time for Germany to get past the crossroads.

Carnegie does not take institutional positions on public policy issues; the views represented herein are those of the author(s) and do not necessarily reflect the views of Carnegie, its staff, or its trustees.