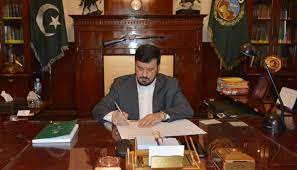 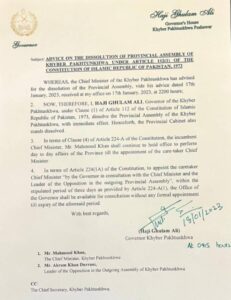 In the summary sent to KP Governor, CM wrote “I, Mahmood Khan, Chief Minister, Khyber Pakhtunkhwa in pursuance of provisions in Article 112(1) of the Constitution of Islamic Republic of Pakistan, do hereby forward my advice for dissolution of provincial assembly of Khyber Pakhtunkhwa on 17th January, 2023, at 2100 hours (9pm).”

Governor Haji Ghulam Ali has 48 hours to decide upon the dissolution of the KP assembly. KP assembly will be dissolved automatically on Thursday after the passage of the 48 hours if he also follows the footsteps of the Punjab Governor, who did not sign the summary to dissolve the Punjab Assembly. Mahmood Khan will continue his responsibilities as KP CM till the appointment of the caretaker chief minister.

CM Mahmood Khan and Akram Khan Durrani, opposition leader in KP assembly, will send three names each for the caretaker CM slot to the Governor. If a consensus is reached, the caretaker CM will be chosen from the given names. Otherwise, the matter will be sent to the parliamentary committee constituted by the speaker with both treasury and opposition MPAs as its members.

If the government and opposition yet failed to reach a consensus on a single name for the caretaker CM, the matter will be sent to the Election Commission of Pakistan, which will appoint the caretaker CM. The development came just days after Punjab CM Chaudhry Parvez Elahi dissolved Punjab Assembly.

In November last year, Ex-prime minister Imran Khan had announced the dissolution of the assemblies, Khyber Pakhtunkhwa and Punjab to exert pressure on the federal coalition government to announce date for general elections.