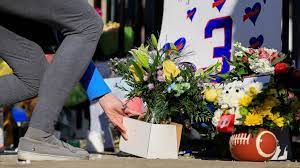 Even before Hamlin was carried off the field in Cincinnati, posts amassing thousands of shares and millions of views began circulating online claiming without evidence that complications from Covid-19 vaccines caused his health emergency.

While cardiac specialists say it’s too soon to know what caused Hamlin’s heart to stop, they’ve offered a rare type of trauma called commotio cordis as among the possible culprits. Physicians interviewed by The Associated Press say there’s no indication Hamlin’s vaccine status played a role, and said there’s no evidence to support claims that a number of young athletes have died as a result of COVID vaccinations.

Peter McCullough, a Dallas cardiologist and outspoken vaccine critic, amplified the theories on a Fox News segment hosted by Tucker Carlson on Tuesday, speculating that “vaccine-induced myocarditis,” may have caused Hamlin’s episode. While the Bills have not said whether Hamlin was vaccinated, about 95% of NFL players have received a Covid-19 vaccine, according to the league.