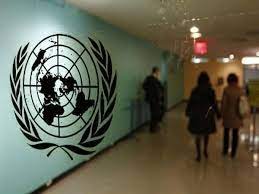 The United Nations has said that the Taliban’s banning of women from working in humanitarian non-governmental organizations is a major blow to vulnerable communities, women, children, and the country. According to the UN authorities, some of the UN agencies in Afghanistan have stopped their activities, while a few other programs will also halt their operations because the Islamic Emirate decided to ban women from working in non-governmental organizations.

Today’s woman is an equally important player in the modern world and their role is not limited to only the homemaking activities but she has an equal share in nation-building, industrial development, the IT sector as well as national defense of the nations around the globe. Presently, women are playing very curicial role in our society while a few of the sectors of our national life can not groom without women’ participation. Realistically, a conflict-ridden nation like Afghanistan needs more participation of women in national affairs because the women are teachers, nutrition experts, team leaders, community health workers, vaccinators, nurses, doctors, and heads of organizations, and have access to populations that male employees cannot reach. Their participation in aid delivery is unavoidable and non negotiable because the absence of female staff can seriously undermine the social and humanitarian activities of certain organizations.

Presently, Islamic Emirate’s ban on girls’ education and women jobs has kicked off a hot discussion in the global capitals and multilateral forums while several International Non-governmental organizations (INGOs) and aid groups had stopped their charity and humanitarian work in violence-hit Afghanistan. The United Nations and G7 countries had called the on Afghan interim government to reverse ban on girls’ education and women employment in INGOs and other organizations because this restriction seriously hurt the operation of those organizations. Currently, global aid is very crucial for the survival of the Afghan nation that is already staggering for its survival amid acute hunger, food, and energy insecurity aimd freezing weather. The current fiasco is a self-made crisis of the Afghan rulers, who have a special tact of discovering new issues out of nothing, but their deeds are being paid by the masses through flush and fluid.