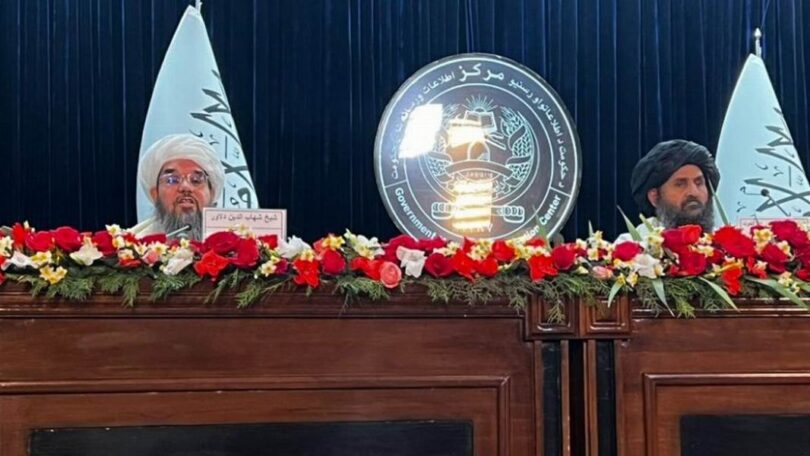 KABUL (Khaama Press): Shahabuddin Delawar, the Acting Minster of Mines and Petroleum of the Islamic Emirate of Afghanistan signed the extraction contract of the Amu oil field with the Chinese company (CPEIC) on Thursday.
The signing ceremony took place in presence of the Chines Ambassador to Afghanistan Wang Yu, and the Acting Minister of Mines and Petroleum of Afghanistan, Shahabuddin Delawar, and other high ranking Afghan officials.
During the official signing ceremony of the extraction contract of Amu oil field with the Chines company, China Petroleum Economics and Information Research Center (CPEIC), the Afghan Minister said that some 3000 jobs will be created for Afghans inside the country. And the capacity of extracting oil from the Qashqari mine will increase from 200 tons to 1000 tons and more.
The area of this contract is estimated 4500 square kilometers, scattered in the country’s three northern provinces including Saripul, Jawzjan and Faryab.
In the contract, it is stated that Afghanistan’s share is 20 percent at present, and it will reach up to 75 percent in the future.
This comes as foreign investment in Afghanistan is almost zero since the Taliban overtook power in August 2021.
To change the current economic status que, the authorities of the Islamic Emirate of Afghanistan is desperately knocking every sing door to attract foreign investment to the country.
This could be a good start for foreign businessmen and investors to consider Afghanistan as a potential and lucrative market in the region.