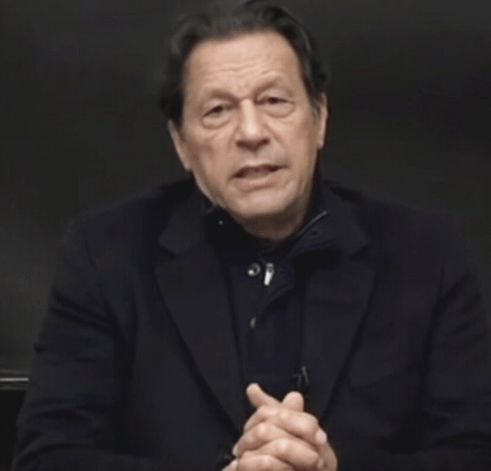 F.P. Report
LAHORE: Pakistan Tehreek-e-Insaf (PTI) Chairman Imran Khan Thursday demanded the formation of a powerful committee, under Chief Justice Umar Ata Bandial’s supervision, to probe the Wazirabad assassination bid.
In a press conference, Khan said: “I earlier stated this as well that I only hope for justice from one place [SC] as powerful people will not allow the investigation to take place.” Khan was shot in the leg on December 3 as he waved to crowds from a truck-mounted container while leading a protest march to Islamabad to pressure the government into announcing an early election — but it was cut short in Rawalpindi.
Hinting at the involvement of the armed forces in his attack, Khan said that although the Pakistan Army was a top institution that serves its country, there are “black sheep” in every institute. “Now, I want the person who planned to have me killed to cooperate with the JIT. These people are intentionally obstructing justice,” the ex-premier said.
The PTI chief earlier blamed Prime Minister Shehbaz Sharif, Interior Minister Rana Sanaullah, and a senior military officer for allegedly being involved in his assassination bid. Khan further said that when Naveed, the suspect in the assassination bid, was arrested, his confessional video statement was released almost immediately “even when I had not reached the hospital after getting shot at”.
The PTI chief said that Naveed claimed he was working alone. “He was programmed to say this.” The ex-prime minister claimed that the suspect was asked to say that he was working alone as if there had been someone aiding him, then he could not be called a “religious fanatic”. Khan said the police quickly recorded the video statement of the suspect and disseminated it among “journalists and television channels” who work against the PTI.
The PTI chief claimed that Naveed was not a random religious fanatic rather he was a trained shooter. “And I know this because I have practised shooting. Blaming the police for not following orders, he said that the officers at the police station where the suspect was held, did not cooperate with the relevant authorities. Khan then said that he had earlier revealed in two public gatherings that a plan was being hatched to have him assassinated and that “two to three people were involved in it”.
“Who were the people creating hurdles in the investigation? Who were the people who did not record the statements?” the ex-PM questioned. Khan maintained that if he has taken a suspect’s name, then it was his right to get a first information report (FIR) registered against him and that the police — which comes under his own government — denied him that right. The FIR was registered almost a week after the attack on Khan on Supreme Court’s orders, but the PTI rejected it and said that the FIR did not include the person’s name that the party wanted.
Khan then added that there were three shooters and not one — a claim made earlier by PTI Senior Vice President Fawad Chaudhry. However, Interior Minister Rana Sanaullah said there was only one shooter and he was a “religious fanatic”. In less than a span of two months, Khan took another U-turn on the “US conspiracy” narrative and claimed that he knew how the loyalties of his lawmakers were changed in the US embassy.
In November last year, khan said that he no longer blamed the US administration for his ouster from the government. “Our people were called to the US embassy,” he claimed. The deposed prime minister said that he knew who was involved in the regime change operation. He retired that money given to the lawmakers to change their loyalties. Without taking the name of former army chief Gen (retd) Qamar Javed Bajwa, Khan said he knew how a single person decided to topple his elected government.