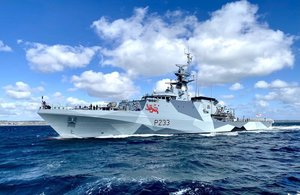 LONDON: The Royal Navy’s offshore patrol vessel, HMS Tamar, sails to the Andaman and Nicobar Islands on 6 January as part of its permanent deployment in the Indo-Pacific.

Over the next five days, the ship and her crew will undertake capability demonstrations and maritime exercises with the Indian Navy.

HMS Tamar is one of two Royal Navy vessels on permanent deployment in the Indo-Pacific as set out in the UK’s Integrated Review. The ship’s visit to India is an opportunity to further strengthen the shared maritime domain awareness effort, and underlines the UK’s and India’s intent to collaborate in the Indian Ocean Region and wider Indo-Pacific.

I am delighted that HMS Tamar is visiting the Andaman and Nicobar Islands this week, during her first time sailing in the Indian Ocean. The opportunity to engage with the local community and conduct training and exercises with the Indian Navy is hugely valuable.

The work HMS Tamar and her crew are doing with allies, partners and friends across the Indo-Pacific is crucial. As threats to global peace and stability mount, the Royal Navy values deeply its relationship with the Indian Navy in a shared endeavour to confront those who challenge the rules-based system and ensure peace and prosperity on and from the sea.

HMS Tamar’s deployment is the UK’s Indo-Pacific tilt in action; its visit, further evidence of the importance we attach to our defence and security relationship with India.

The Indo-Pacific, and indeed India, will drive future growth and prosperity for the world. It is imperative that it remains free and open to all in support of trade, shared security and values.