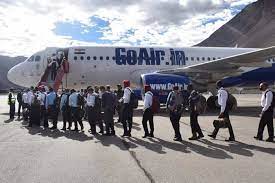 NEW DELHI: A Delhi-bound Go First plane left the city airport without taking more than 50 passengers, who were waiting in a shuttle bus for boarding, and India’s aviation regulator DGCA has sought a report from the airline on the incident.

Some passengers alleged on social media that a busload of passengers were not taken onboard the Go First flight from Bengaluru to Delhi. The flight G8 116 departed at 6.40am on Monday, leaving behind the passengers, they alleged.

However, in response to one of the tweets, the airline urged the users to share their details and said: “We regret the inconvenience caused”.

“Flight G8 116 (BLR-DEL) flew leaving passengers on ground! More than 50 passengers on 1 bus were left on ground & the flight took off with just passengers of 1 bus on boarded. Is @GoFirstairways @JM_Scindia @PMOIndia operating in sleep? No Basic checks!” said a tweet from a passenger named Satish Kumar.

Another passenger Shreya Sinha too complained on Twitter, saying, “most horrifying experience with @GoFirstairways 5:35 am Boarded the bus for aircraft 6:30 am Still in bus stuffed with over 50 passengers, driver stopped the bus after being forced. Flight G8 116 takes off, leaving 50+ passengers. Heights of negligence! @DGCAIndia”.

A senior official at the Directorate General of Civil Aviation (DGCA) said, “We have sought a report from the airline and appropriate action shall be taken afterwards”.