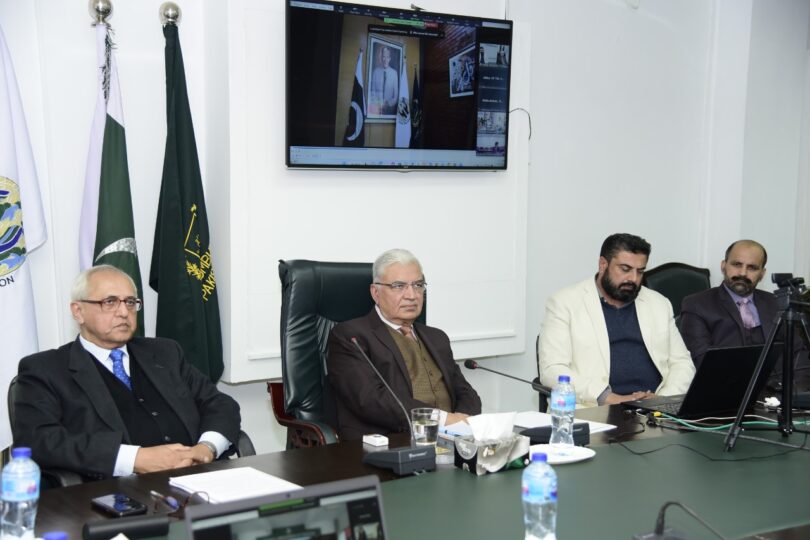 ISLAMABAD: The Hon’ble Federal Ombudsman Mr. Ejaz Ahmad Qureshi opened today an International Workshop on the Role of the Integrated Computer Technologies (ICT) in the Public Grievance Redressal System. The two-day’s Workshop is being held online from the platform of the Asian Ombudsman Association (AOA) whose Permanent Secretariat is housed within the Wafaqi Mohtasib Secretariat at Islamabad. Mr. Ejaz Ahmad Qureshi is the current President of the Asian Ombudsman Association (AOA).

The Workshop is being attended by 43 participants representing ombudsman institutions of China, Hong Kong, Indonesia, Macau, Malaysia, Thailand, Turkey, Uzbekistan as well as Provincial Ombudsman institutions of Sindh, KPK, Federal Tax Ombudsman and Banking Mohtasib Pakistan. Head of Ombudsman institution Azad Jammu & Kashmir is also taking part in the said Workshop.
Addressing the participants, Mr. Ejaz Ahmad Qureshi stated that the prompt and efficient disposal of complaints is of critical importance in dispensation of justice. The use of ICT is essential in maintaining a credible, transparent, effective and efficient mechanism to sustain the trust of the general public. He added that the application of computer technologies in any field of human endeavour required regular upgradation, R&D and adaptation in line with the emerging requirements.

Federal Ombudsman’s institution in Pakistan shall be celebrating forty years of its establishment in January next year. In this long journey, it has established its credentials as an effective instrument for providing speedy and inexpensive justice to the people and addressed over 1.8 million complaints since its inception. Besides the Head Office in Islamabad, 18 Regional Offices in different parts of the country are performing their statutory functions. Recently, two complaint collection centres were opened at Wana, South Waziristan and Sadda, Kurram Agency.

The Federal Ombudsman’s Office has over the years perfected its complaint handling mechanism comprising investigation, appraisal, review and implementation of decisions. It is now fully capable of resolving complaints of maladministration in large numbers, reaching out to the complainants and holding public hearings at their doorsteps, informal resolution of disputes, inspe ction of agencies to improve their service delivery and studying the root causes of maladministration.

It has conducted more than 27 studies on systemic issues attracting persistent complaints.

Highlighting the impact of ICT on the work of the Wafaqi Mohtasib’s institution in Pakistan, Mr. Qureshi added that the scope and magnitude of its work has increased manifolds over the last forty years. The Wafaqi Mohtasib’s Secretariat was able to successfully cope with these increasing demands through the use of latest IT tools and upgrading the grievance redressal mechanism on regular basis. A number of modules were developed by the IT Wing internally to cater to the specific requirements of the complainants as well as the federal agencies in maintaining a transparent and credible interface with them.

Wafaqi Mohtasib (Ombudsman), Mr. Ejaz Ahmad Qureshi offered that Pakistan remained ready to share its expertise and best practices in redressing the public grievance with other members of the AOA. He hoped that the AOA, being a major non-political professional body representing more than two-thirds population of the world, offers immense scope for mutual cooperation in promoting the ultimate goal of good governance, rule of law, justice and fair play in the Asian region and beyond.
CDA cuts Paper Mulberry trees for countering pollen risk

ISLAMABAD, Dec 28 (APP):The Capital Development Authority (CDA) was uprooting and felling the Paper Mulberry trees to ensure a healthy and clean environment in the federal capital without the risk of pollen allergy.

The policy was devised regarding eradication of Paper Mulberry trees and would be placed before the competent forum for approval soon, an official of CDA told APP.

He said the planting of Paper Mulberry trees was completely banned here and it would be replaced with planting fruit trees to provide a healthy environment to the citizens.

He further said the authority was committed to utilizing resources to plant fruit trees after the cutting of paper Mulberry trees to reduce the risk of pollen pollution and to keep the capital beautiful.

Paper Mulberry has been notoriously known for causing serious respiratory ailments and pollen allergy that was not compatible with local environment and caused health hazards.