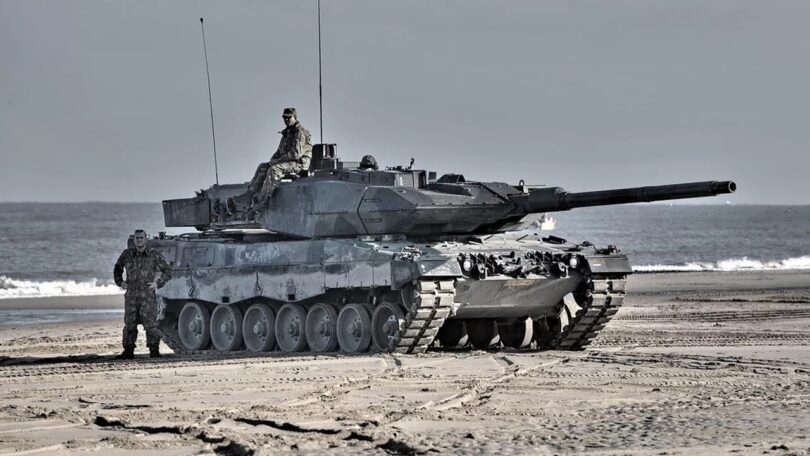 The US and NATO failed to convince Berlin to part with some of its Leopard 2s and become the first continental European power to send Western tanks to Ukraine during talks at Ramstein Air Base on Friday. German intransigence sparked howls of anger and derision in both Washington and Kiev.
Chancellor Olaf Scholz’s decision to hold off on the delivery of Leopard 2 tanks to Ukraine sparked a fierce debate among senior lawmakers within Germany’s coalition government, with Free Democratic Party lawmaker Marie-Agnes Strack-Zimmermann leading the charge in attacking the chancellor.
“If you don’t want to deliver Leopard 2s, you must explain why,” Strack-Zimmermann, chairwoman of the Bundestag’s Defense Committee, told German media on Saturday.
“We’re always one step behind. We always wait for something to happen. Germany waits, the Federal Chancellery waits until pressure increases,” the lawmaker complained. She added that since Berlin has already agreed to deliver Marder infantry fighting vehicles, it should send tanks too because the equipment “works together. And if you don’t want all that, you have to explain it to the people.”
Rolf Mutzenich, leader of Chancellor Scholz’s German Social Democratic Party’s faction in the Bundestag, slammed Strack-Zimmermann’s rhetoric, accusing her and others like her of “taking us into a military conflict,” and calling on Berlin to be guided by “common sense” when it comes to German-made combat vehicles.
“The same people who are calling for going it alone with heavy battle tanks today will be screaming for planes or troops tomorrow,” Mutzenich said, adding that there was no place for “outrage rituals” in today’s shaky security situation in Europe.
Strack-Zimmermann struck back on Twitter, calling Mutzenich a “symbol of all the failures of German foreign policy,” and accusing him of holding “yesterday’s views,” which will “lead to tomorrow’s problems. He is no longer able to adapt his worldview to reality.”
The Free Democratic Party lawmaker found support from Ukrainian Deputy Foreign Minister Andriy Melnyk, who was recalled as ambassador to Ukraine last year after calling Chancellor Scholz a “liverwurst sausage.”
“Good point, dear lady Strack-Zimmermann! But why do you tolerate this coalition partner? Is the Traffic Light coalition more important to you than saving Ukraine?” Melnyk tweeted, referring to the coalition government for-med in 2021, which incl-udes the Social Democrats (red), the Free Democratic Party (yellow), and the Green Party (green).
The Ukrainian official slammed Berlin over its indecision on Leopards this week, calling Germany’s position an “embarrassment,” “disgrace and huge disappointment,” and calling on the Scholz government to “put an end to this crazy Punch and Judy Show.”
Melnyk’s sentiments were echoed by hawks across the Atlantic in the US Senate, among them Lindsey Graham (R) of South Carolina, who vented that he was “tired of the s***show of who is going to send tanks and when they are going to send them.”
Fellow Republican and Georgia Congresswoman Marjorie Taylor Greene blasted Graham over his position on Saturday, tweeting that US lawmakers are supposed to “serve the American people who pay for the tanks and our salaries, not [Ukrainian President Volodymyr] Zelensky.”
Greene also asked Graham why he wasn’t “calling for tanks at America’s southern border while our country is invaded every day and Americans are being murdered in record numbers” by fentanyl, the opioid streaming into the country alongside migrants.
The proposal to send tanks to Ukraine sparked a fierce debate in the Bundestag earlier this week, with an Alternative for Germany lawmaker warning that the last time Berlin sent tanks east, Soviet tanks ended up in the streets of Berlin.
Washington has put major pressure on its German allies to send some of the estimated 328 Leopard 2s left in the Bundeswehr’s arsenal to Ukraine. German Defense Minister Boris Pistorius has promised to check the army’s inventory. According to German media, Berlin might send Kiev its 19 oldest Leopard 2s, which were previously used to simulate enemy tanks in drills.
The UK announced plans to deliver 14 Challenger 2 tanks to Ukraine earlier this month, making it the first NATO country to send Western-made main battle tanks to the conflict zone. Washington has held off on deploying its own jet-engine-powered gas-guzzling M1 Abrams tanks to the east, citing their weight and supposed unsuitability to the Ukrainian environment – a claim that stands at odds with the fact that the Cold War-era tank was designed specifically to fight Soviet tanks in a European battle space.