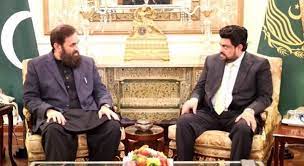 KARACHI (APP): Sindh Governor Mohammed Kamran Khan Tessori met Punjab Governor Mohammed Balighur Rehman at Governor house Punjab.
According to a Sindh Governor house communique on Sunday, they discussed the overall political situation, inter-provincial harmony, cooperation in different sectors, and other issues of mutual interests.
It was agreed in the meeting that both the provinces could benefit from their experiences. Sindh Governor said that he was contacting all stakeholders of the Sindh province.
Punjab Governor Balighur Rehman said that the efforts of the Sindh Governor for the harmony were appreciated.
Financial stability in country has great impact on Karachi’s development: Sindh Governor: Sindh Governor Kamran Khan Tessori has said that financial stability in the country and development of Karachi are interconnected.
Talking to media after visiting Mausoleum of Hazrat Ali Hajveri RA (Data Darbar) here on Sunday, he said that the largest city of the country and financial hub was facing the shortage of energy, gas and water which could only be improved with the improvement in the national economy.
He demanded the Pakistan Peoples Party to fulfill its promises made with the MQM Pakistan.
The governor said that he wanted unity instead of differences in all groups of the MQM for the national interests. He said that he had met with Punjab Governor Balighur Rehman and Chief Minister Ch Pervaiz Elahi.
He said the Punjab provincial capital was a beautiful city and he had a cordial attachment with the city.
Earlier, the Sindh Governor visited the Darbar and prayed for prosperity of Pakistan, Sindh and Karachi.