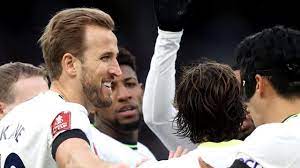 Moments after Emerson Royal’s header hit the post, Kane exchanged passes with Ryan Sessegnon before curling into the far corner from 18 yards.

Kane has now scored 265 Spurs goals, one behind the legendary Greaves. Oliver Skipp fired over a great chance to add a second goal but the League One visitors had no reply to Kane’s strike.

With Dejan Kulusevski, Richarlison and Lucas Moura among a growing Spurs injury list, Antonio Conte was forced to start Kane and Son Heung-min in a strong forward line despite making eight changes overall. Spurs had scored just one first-half goal in their previous 12 games and never looked like adding to that during a quiet opening 45 minutes in north London, failing to register a single shot on target.

Indeed, Portsmouth, cheered on by a sold-out allocation of more than 8,000 noisy visiting fans, created the first half’s best effort as Reeco Hackett-Fairchild’s acrobatic shot on the turn was pushed wide by Fraser Forster.

However, Spurs stepped things up following the restart and, just after Royal headed Son’s deep cross on to the post, Kane produced the moment of magic that ultimately proved decisive.

Conte’s assistant Cristian Stellini this week said the FA Cup was “an important target” for Tottenham and that their players had spoken of the need to end a trophy drought dating back 15 years to Spurs’ 2008 League Cup win.

They are out of the Carabao Cup this season and sit fifth in the Premier League, 11 points behind leaders Arsenal having played a game more, leaving the FA Cup and Champions League as their realistic hopes of ending that barren spell.

Tottenham have not reached the FA Cup final since winning the competition in 1991, losing in all eight of their subsequent semi-final appearances.

Spurs supporters of a superstitious ilk will take heart from the fact they beat Pompey en route to Wembley 32 years ago when Paul Gascoigne – a Tottenham talisman akin to Kane – scored twice in a 2-1 win at Fratton Park.

Tougher tests than this one will lie on the road ahead if they are to add to their eight FA Cup wins but Spurs produced a professional, if unexceptional, performance to limit managerless Pompey to very little.

Portsmouth are on a nine-game winless run that has seen them slip to 12th in the third tier, nine points off the play-offs – a sequence that this week cost boss Danny Cowley his job after almost two years in charge.

The 2008 winners, enduring an 11th successive season outside English football’s top two tiers as they recover from near financial ruin, produced a resilient and organised effort for caretaker boss Simon Bassey, but Kane’s winner ensured Spurs have not lost at home to a non top-flight team in the FA Cup since 1975, a run spanning 44 games.