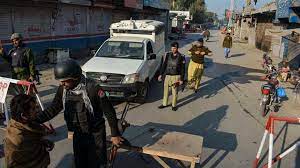 PESHAWAR: Minister for Defense Khawaja Asif said on Tuesday while confirming that all six terrorists who had taken hostages at a Counter-Terrorism Department (CTD) compound in Bannu were killed, said that two SSG Commandoes were also martyred.

Speaking in the parliament, the defence minister informed the joint session of Parliament that security forces, in a successful operation, got all the hostages released, detained in CTD compound in Bannu by terrorists.

Speaking in the Parliament, he said the Special Service Group of Pakistan Army started operation at 12:30 pm on Tuesday and got the compound cleared by 2:30 pm. He said all the terrorists were killed in the operation.

Asif went on to say that two security officials embraced martyrdom in the operation, while around 15 SSG personnel, including an officer, got injured.

Earlier, the standoff between the security forces and the militants associated with the Tehreek-i-Taliban Pakistan (TTP) continued. More than 30 Pakistan Taliban militants raided the CTD facility on Sunday, held several officers hostage after breaking free from custody and seized the centre, officials said.

Sources claimed that in order to neutralise the situation, law-enforcement agencies decided to engage a cleric, Maulana Ahmadullah, from the Domail area of the city. The cleric will be asked to negotiate with the terrorists. On the other hand, a delegation comprising religious scholars and tribal elders from Chaman left for Kandahar on Monday as part of efforts to find a solution and restore peace at the Pak-Afghan border at Chaman.

Security forces kept conrdoning off the Cantonment area and suspending internet communication. There were reports that one policeman was killed and three other security pesonnel suffered injuries in the incident. Sources claimed that the suspects were demanding their safe air evacuation to the Afghanistan border. The suspects also held interrogators hostage.

More than 30 TTP militants were holding several officers hostage on Monday after breaking free from custody and seizing a police station, officials said. Members of the Tehreek–e-Taliban Pakistan (TTP) group (separate from the Afghan Taliban but with a similar hardline Islamist ideology) overpowered their jailers on Sunday and snatched weapons. The militants, held on suspicion of terrorism, are demanding safe passage to Afghanistan, Muhammad Ali Saif, a spokesman for the Khyber Pakhtunkhwa government, said in a statement late on Sunday.

A senior government official in Bannu, where the incident is unfolding near the border with Afghanistan and Pakistan s former self-governed tribal areas, said hostages were still being held after a failed operation to free them. “During the interrogation, some of them snatched guns from the policemen and later took the entire staff hostage,” he told AFP on the condition of anonymity.

“They want us to provide them safe passage via a ground route or by air. They want to take all the hostages with them and to release them later on the Afghan border or inside Afghanistan.”

The TTP claimed responsibility for the incident and demanded authorities provide safe passage to border areas. “Otherwise, the entire responsibility of the situation will be on the military,” the TTP said in a statement.

A video posted to social media, which the government official confirmed to be from the scene, showed a group of armed men with long beards, with one threatening to kill all the hostages. He said they had at least eight hostages, including police and military staff.

The TTP emerged in 2007 and carried out a horrific wave of violence in Pakistan that ended with a military crackdown in 2014. Attacks are on the rise again since the Afghan Taliban seized control of Kabul last year but have mostly targeted security forces. A shaky months-long ceasefire agreed with Islamabad ended last month.

In 2012 and 2013, dozens of heavily armed Taliban fighters freed more than 600 prisoners, including hardcore militants, during two sophisticated overnight attacks on a jail in Bannu town.