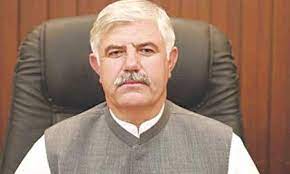 F.P. Report
PESHAWAR: Chief Minister Khyber Pakhtunkhwa Mahmood Khan has directed the concerned authorities to complete all codal formalities for commencement of academic activities at the newly established University of Veterinary and Animal Sciences on priority basis.
“This is the first-ever university of its kind in the province and of vital importance owning to growing needs of veterinary education in region,” he remarked and added that the project on completion would not only promote innovative research techniques in this field but would also provide a solid base for the sustainable development of all relevant sectors.
While chairing a progress review meeting regarding commencement of classes at the University of Veterinary and Animal Sciences, the Chief Minister directed the concerned quarters to bring the relevant laws and rules in coherence with contemporary needs, adding that the proposed draft of the act already under consideration be finalized immediately and submitted for approval. Principal Secretary to Chief Minister Amjad Ali Khan, higher authorities of Live Stock, Law and Establishment departments and other relevant officials attended the meeting. It is pertinent to mention here that the newly established university will provide education and research facilities in 20 different departments of three faculties.
Under the faculty of Bio Sciences, seven different departments would be established, including Anatomy, Physiology, Pharmacology, Fisheries, Wildlife, Biochemistry and Biotechnology.
Similarly, under the Faculty of Veterinary Science, nine different departments, including Pathology, Microbiology, Medicine, Surgery and Pet Sciences would be established, whereas under the faculty of Animal Production and Technology, five departments would be established, including Animal Nutrition, Livestock Management, Poultry Sciences, Breeding and Genetics and Department of Meat and Dairy Technology. It was further told that the relevant institutions of the Livestock and Dairy Development Department would also be linked to the university as outreach centers.
Briefing the forum about preparedness for the commencement of classes and other related matters of the university, it was told that the construction work on the building of the University is in progress.
The Chief Minister termed the establishment of the University of Veterinary and Animal Sciences a necessity of the region, adding that the existing universities offer limited programs in veterinary education while the demand is much higher.
He said that the establishment of the proposed university would not only provide quality education and research facilities for students but would also prove to be a milestone for the development of livestock and allied fields.