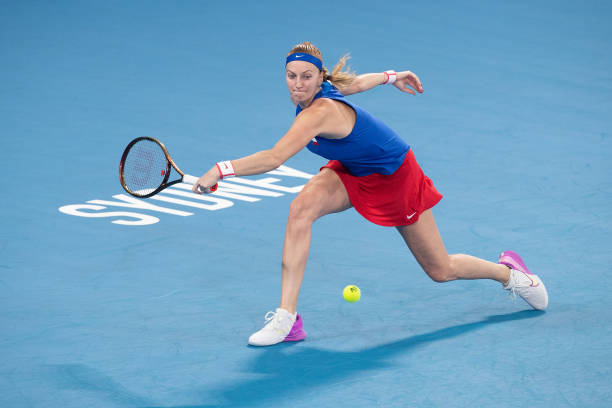 Sydney (APP): Petra Kvitova upset world number three Jessica Pegula Friday at the United Cup, but fellow top 10 players Maria Sakkari and Caroline Garcia both earned victories.
Two-time Wimbledon champion Kvitova clinched a thriller, saving seven set points in the first set before winning 7-6 (8/6), 6-4 at the Ken Rosewall Arena.
It was not enough to save the tie for the Czechs, though, as the United States took it 4-1. In Perth, the sixth-ranked Sakkari and WTA number four Garcia from France both came through with victories.
Sakkari gave Greece an unassailable 3-0 lead over Bulgaria when she beat Viktoriya Tomova 6-3, 6-2.
“I was a little nervous in the beginning, especially being 2-0 up in the tie, I knew my match was crucial in winning the tie,” said Sakkari. “She was very solid, but I found my game and got better.” Her teammates Stefanos Tsitsipas and Despina Papamichail won their matches on Thursday.
Garcia, winner of last month’s year-end final in Texas, hammered Argentine Nadia Podoroska 6-2, 6-0, finishing with a leaping overhead smash after 64 minutes to give France a 3-0 success after two opening-day wins.
“Our team members all have the same goal,” Garcia, who ranked 74th a year ago due to injury, said.
“Let’s see where it brings us. We want to get some more points, we want to go for it.” After the Americans won the opening two rubbers on Thursday, Kvitova’s victory gave her country hope in the inaugural tournament, which features two men’s and two women’s singles matches along with a mixed doubles.
But the US clinched the tie when Tomas Machac injured his ankle against 19th-ranked Francis Tiafoe and was forced to retire hurt while down 6-3, 2-4.
Kvitova, ranked 16, looked back to her best against Pegula, who burst into the top 10 in 2022 by winning the WTA 1000 tournament in Guadalajara for the biggest title of her career.
After a topsy-turvy first set that could have gone either way, she got a double break at the start of the second set and while the American got one back, Kvitova was able to hold on and take the match in two hours.
“It was a high-level match for a solid two hours, it got kind of physical towards the end,” said Pegula. “She can really step into the court, hits lots of winners and hits a big ball. It’s not always easy playing someone like her first match of the season.” Tiafoe, a US Open semi-finalist this year, started brilliantly against Machac, racing through the first set with relative ease.
Machac fought back in the second and was a break up before rolling his ankle and retiring. The Czech Republic will face Alexander Zverev’s Germany on Saturday while the US have two days off before they close out group play against the Germans.
Switzerland completed a 3-0 defeat of Kazakhstan in Brisbane, with captain Stan Wawrinka beating Alexander Bublik 6-3, 7-6 (7/3) a day after wins from Olympic champion Belinda Bencic and Marc-Andrea Huesler.

– Great level – Wawrinka, a three-time Grand Slam champion who has struggled with injury, finished his match with a winning forehand to the corner.

“It feels good to be back in Australia,” the 37-year-old said.

“It’s been a long time since I played here. Tonight I had a great level. I’m super-happy with how I’m playing.

“I had to play aggressive and push him at every opportunity.” Italy wrapped up their tie against Brazil when they won both singles matches in Brisbane, with the tournament being played across three cities.

Brazil face Norway on the weekend while Italy take on the Norwegians on Monday and Tuesday.

Jason Kubler, ranked 107th, earned a morale-boosting first point of the tournament for Australia, coming from 0-5 down in the second set to defeat Britain’s Dan Evans 6-3, 7-6 (7/3).