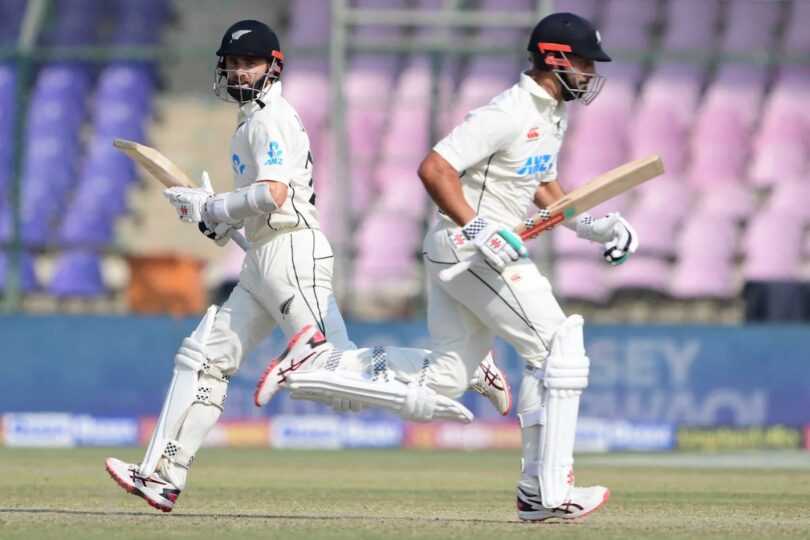 KARACHI: Tom Latham stroked his 13th century and Kane Williamson registered his 25th hundred as New Zealand comfortably edged past Pakistan’s first-innings score on the third day of the first Test at the National Bank Cricket Arena on Wednesday.

Resuming at the overnight score of 165 for no loss in reply to Pakistan’s 438, New Zealand ended the day at 440 for six. The visitors, playing their first Test here in 32 years, lead Pakistan by two runs with four wickets intact.

Latham had started this morning at 78 and became one of the three Abrar Ahmed’s victims after scoring 113, while Williamson was still at the crease on 105 – his first international century in 23 months and fifth against Pakistan in 14 Test appearances. With the former captain was Ish Sodhi on one not out.

Devon Conway, who began this morning with Latham at 82, missed his fourth century by eight runs after television replays confirmed Noman Ali’s delivery would have hit the stumps after the umpire had turned down a confident LBW appeal. Conway’s 92 came off 176 balls and included 14 fours.

Conway and Latham put on 183 runs for the first wicket, which was New Zealand’s new first wicket partnership record against Pakistan. Latham struck 10 fours in his 191-ball innings. It was his third century against Pakistan in his 12th Test, second of the year in nine Tests and first since he scored 252 against Bangladesh in Christchurch in January.

Williamson punished Pakistan for twice letting him off when on 15 and 21 with signature strokes to all parts of the field. His 105 has come from 222 balls and includes 11 fours. Williamson’s half-century came off 100 balls, while his second 50 runs came from 106 balls.

New Zealand were strongly placed at 427 for four before Pakistan picked up two late wickets to share third day’s spoils. Mohammad Wasim trapped Blundell in front of the wickets, while Michael Bracewell (5) was forced into a false shot by Abrar, who had earlier claimed the scalp of Mitchell. Abrar finished the day with figures of three for 143, while Noman Ali ended the day with two for 137.