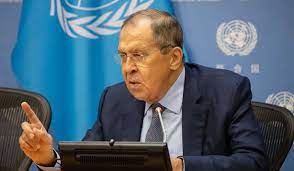 MOSCOW (Reuters): Moscow s proposals for settlement in Ukraine are well known to Kyiv and either Ukraine fulfils them for their own good or the Russian army will decide the issue, TASS agency quoted Russian Foreign Minister Sergei Lavrov as saying.

“Our proposals for the demilitarization and denazification of the territories controlled by the regime, the elimination of threats to Russia s security emanating from there, including our new lands, are well known to the enemy,” the state news agency quoted Lavrov as saying late on Monday.

“The point is simple: Fulfil them for your own good. Otherwise, the issue will be decided by the Russian army.”

Moscow has been calling its invasion in Ukraine a “special military operation” to “demilitarise” and “denazify” its neighbour. Kyiv and its Western allies call it an imperial-style aggression to grab land.

In September, Moscow proclaimed it had annexed four provinces of Ukraine – Donetsk, Luhansk, Zaporizhzhia and Kherson – after holding so-called referendums that were rejected as bogus and illegal by Kyiv and its allies.

On Sunday, Russian President Vladimir Putin said Moscow was open to negotiations and blamed Kyiv and its Western backers for a lack of talks, a stance Washington has previously dismissed as posturing amid persistent Russian attacks.

Lavrov told TASS that when it comes to how long the conflict will last, “the ball is in the regime s court and Washington behind it.”

There is no end in sight to the war, which has entered its 11th month and which has killed thousands, displaced millions and turned cities into rubble.

Kyiv has ruled out conceding any land to Russia in return for peace, and publicly demands Russia relinquish all territory. Moscow has insisted it is pursing “demilitarisation” and “denazification” but in reality its aims have not been fully defined.

Russian President Vladimir Putin and his Chinese counterpart Xi Jinping will speak before the end of the year, Russian state news agency TASS said on Monday (Dec 26), without giving details of the timing or format.

It quoted Kremlin spokesman Dmitry Peskov as saying the two sides would release details in due course.

Putin and Xi proclaimed a “no limits” partnership between the two countries when the Russian leader visited Beijing in February, three weeks before his invasion of Ukraine.

With Western countries condemning the war and slamming Russia s economy with sanctions, the partnership with China has taken on even greater importance for Putin, though he publicly acknowledged in September that Beijing had expressed “questions and concern” over Ukraine.