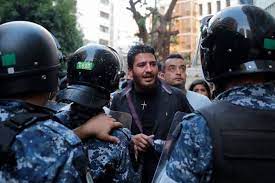 BEIRUT (AFP): Activists gathered in front of a police station in the Lebanese capital Saturday to protest the arrest of the brother of a victim of a deadly 2020 blast, witnesses said.

William Noun — whose brother, a fireman, was killed in the August 2020 Beirut port blast — was arrested Friday over remarks made during a television program, a judiciary source told AFP.

The young man is a leading figure among families of the blast’s victims who have been calling for the continuation of a probe into the tragic event, on hold for over a year.

Noun’s arrest sparked protests Friday night, as his relatives and other victims’ families, along with activists, cut off roads in the capital.

Known for his outspokenness, the young man had threatened during televised remarks Thursday to “blow up the palace of justice” to protest moves to replace the judge investigating the blast.

Embattled judge Tarek Bitar has faced an endless series of complaints against him, part of a campaign led by Shiite group Hezbollah and its allies seeking to block his probe into the blast.

On Friday, relatives of the victims threw stones at the palace of justice in Beirut, breaking some windows, in a protest over Noun’s arrest.

Demonstrations resumed again on Saturday in front of the police station where Noun was being held, according to witnesses.

“This is an attempt to intimidate but it won’t work,” Noun’s lawyer, Ralph Tannous, told Lebanese television. “This is a political move, not a judicial one.”

MP and lawyer Melhem Khalaf meanwhile told AFP, “I wish they would implement with the same enthusiasm all the warrants issued by the judicial investigator” over the port blast.

The 2020 disaster, one of history’s biggest non-nuclear explosions, killed more than 200 people and decimated vast areas of the capital after a stockpile of haphazardly stored ammonium nitrate caught fire.

Bitar has attempted to question a former premier and four ex-ministers over the tragedy but his probe was repeatedly obstructed before being suspended.