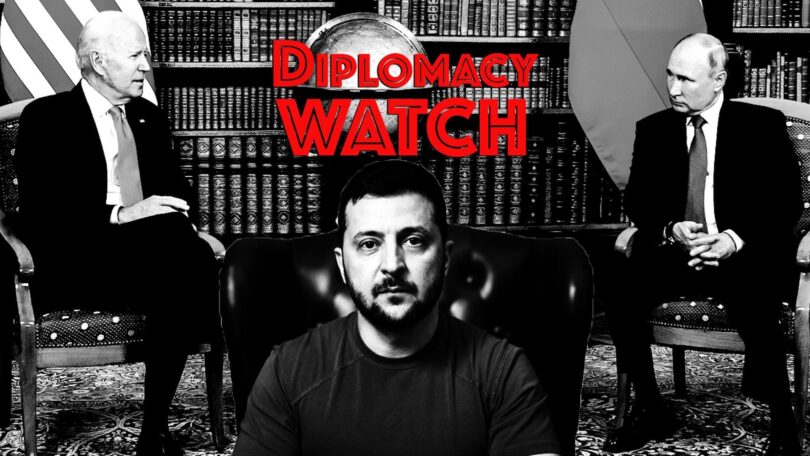 Russia has undertaken a major shift in its strategy in Ukraine over the past few months. With the frontlines at a relative stalemate, Moscow has shifted its focus from heavy shelling to a brutal game of whack-a-mole in which it fires a series of drones and missiles at sensitive infrastructure in Ukraine.
The result of this bombing campaign has been substantial. Over the holidays, Ukrainian President Volod-ymyr Zelensky said that “nearly nine million people” had lost electricity — nearly one-fifth of Ukrai-ne’s pre-war population. As Barry Posen of the Massa-chusetts Institute of Techn-ology recently noted, such a tactic “could turn the winter into a brutal struggle for survival for Ukrainian civilians.”
But the campaign’s main target may lie further west. According to the New York Times, each Iranian-made suicide drone costs about $20,000, while the missiles Ukraine uses to shoot them down cost at least $140,000 and often much more. (Am-erican-made NASAMS missiles cost $500,000, and each PATRIOT round costs as much as $4 million.)
So when Russia launches 80 drone attacks on Ukraine — as it did over New Year’s weekend — the Kremlin spends about $1.6 million while forcing Kyiv (and its Western backers) to drop at least $11.2 million.
For now, these numbers fall well short of putting a dent into the $61.4 billion that the United States alone has pledged to Ukraine’s defense. And it’s uncertain whether the Kremlin is capable of mass-producing suicide drones throughout the year.
But the 80-drone barrage could be the first sign of a significant escalation in Russia’s strategy. If Moscow manages to maintain this rate of attack each weekend, then Kyiv’s backers could be on the hook for over $1 billion per year in air defenses alone.
And, when it comes to Russia’s ability to manufacture weapons, Western doubts have often failed to materialize. “Even though U.S. and British officials have regularly predicted that the Russian military would exhaust its supply of munitions, it has evidently found them somewhere,” Posen wrote in Foreign Affairs.
As Michael Carpenter, the U.S. ambassador to the Organization for Security Cooperation in Europe, re-cently argued, the United S-tates faces many difficult trade-offs when it comes to assistance to Ukraine, and the high price tag of certain systems will inevitably ma-ke it harder to provide others.
“You have to factor in costs,” Carpenter told Politico. “The enemy certainly factors in costs.”
In other diplomatic news related to the war in Ukraine:
— Turkish President Recep Tayyip Erdogan told Putin in a Thursday conversation that his “[c]alls for peace and negotiations should be supported by a unilateral cease-fire and a vision for a fair solution,” according to Bloomberg. Erdogan’s ask signals a slight shift in Turkish rhetoric, which has largely included calls for a bilateral ceasefire in the past. The Turkish leader also spoke with Zelensky later in the day and said that he is ready to lead mediation between the belligerents.
— The United States continues to talk with Russian officials about a potential prisoner swap for ex-Marine Paul Whelan, who the U.S. says has been wrongfully held by Mosco-w since 2018, according to CNN. “We’re going to be creative in doing everyth-ing we can to bring about Paul Whelan’s return to the United States,” said State Department spokesperson Ned Price in a press briefing.
— Putin declared a temporary ceasefire from Friday afternoon through Saturday night in honor of Christmas, which many Russians and Ukrainians celebrate on January 7, according to NPR. The move comes after the head of Russia’s Orthodox church called for a pause in fighting for the holiday, a request that Ukraine slam-med as “a cynical trap and an element of propaganda.”
— International Monetary Fund chief Kristalina Georgieva said Monday CHECK that one third of the world economy will face a recession this year due to the war in Ukraine, increased inflation, and a sharp jump in Covid cases in China, according to the BBC. Georgieva noted that Europe and China will almost certainly see an economic slowdown, while the United States is “teetering on the verge.”
— In Le Monde Diplomatique, Finnish analysts Tapio Kanninen and Heikki Patomaki suggest a potential path toward peace.
“An option that should be seriously considered is to demilitarise the contested territories in Eastern Ukraine and put them temporarily under the auspices of the UN. After a period of back-channel diplomacy and negotiations, the UN Security Council could declare, or the parties could directly negotiate, a binding ceasefire, with the deployment of a peacekeeping force and other UN personnel. The areas of Ukraine occupied by Russian forces would be demilitarised and governed temporarily by the UN, with some flexibility in specifying the boundaries of the territories.
[…] A ‘UN transitional administration of Eastern Ukraine’ would also be tasked with helping to negotiate and draft a new legal basis for the status of these regions and holding regular elections, as well as a possible referendum.”
U.S. State Department news: In a Tuesday press briefing, Price argued that reports of division among American elites over Ukraine policy have been exaggerated. “Secretary [Antony] Blinken last month had an opportunity to brief both houses of Congress along with some of his counterparts from the Defense Department, from the intelligence community and elsewhere. We provided an opportunity for all members, all senators, all House members, to hear about our approach,” he said. “What we heard in turn was broad bipartisan support for that approach.”