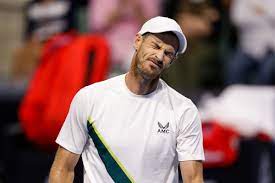 Adelaide (Agencies): Andy Murray’s first match of 2023 ended in a straight-set loss to American Sebastian Korda in the Adelaide International.

Murray had recovered from a break down in the opening set to force a tie-break but Korda, 22, took control of that and went on to dominate the second set.

Edmund, who is ranked 582 in the world but was using a protected ranking to enter the event after a series of injuries, lost 6-3 6-2 to Italian sixth seed Jannick Sinner.

Earlier, Novak Djokovic swept to victory over France’s Constant Lestienne in his first singles match on Australian soil since being deported a year ago.

The Serbian 21-time Grand Slam winner was given a warm welcome when he played a losing doubles match on Monday and received similar treatment on a packed centre court in his 6-3 6-2 win.

“For the first match I can’t complain, I played very well,” said the 35-year-old, who is now the world number five and will be seeking a record-extending 10th Australian Open men’s singles title later this month. “Thank you all for coming out today. Thank you for giving me the welcome that I could only wish for. “If I have to pick one country where I’ve had the most success, which treated me in the best way in terms of tennis, it’s here, definitely.” Djokovic was deported before the 2022 Australian Open because of his Covid-19 vaccination status but his three-year visa ban was overturned in November, allowing him to enter the country.

Russian Daniil Medvedev, who lost to Djokovic in the 2021 Australian Open final and was beaten by Rafael Nadal in the Grand Slam decider 12 months ago, saved nine set points on his way to a 7-6 (8-6) 2-1 win over Italian Lorenzo Sonego, who retired injured.