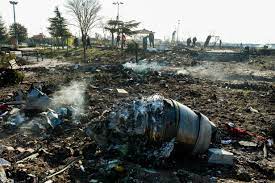 LONDON (Arabnews): A coalition of nations whose citizens were killed in the shooting down of an airliner by Iran has said it has taken “concrete” action to ensure the regime in Tehran is held accountable.

Ukraine International Airlines Flight PS752 was hit by two missiles as it left the Iranian capital for Kyiv on Jan. 8, 2020. Nine crew and 167 passengers from Iran, Afghanistan, Sweden, the UK, Ukraine and Canada were killed.

The International Coordination and Response Group of four of the nations involved said on Wednesday that it was determined to hold Iran to account.

“We ministers, representing Canada, Sweden, Ukraine and the United Kingdom, have requested that Iran submits to binding arbitration of the dispute related to the downing of Flight PS752 by 2 surface-to-air missiles,” a statement from the group said.

It repeated that the missiles were “launched unlawfully and intentionally by members of Iran’s Islamic Revolutionary Guard Corps air defense unit” and that it was seeking redress under “Article 14 of the Convention for the Suppression of Unlawful Acts against the Safety of Civil Aviation of 1971.”

“The Coordination Group remains committed to pursuing efforts to hold Iran accountable for its multiple breaches of its international legal obligations pursuant to several treaties,” its  statement added.

“This action is part of our broader approach to ensuring there is transparency, justice and accountability for the victims and their families,” it also said.

The convention is also known as the 1971 Montreal Convention. Canada, Sweden, Ukraine, Britain and Iran are all signatories.

It requires states to prohibit, prevent and punish certain offenses against civil aviation, including the unlawful and intentional destruction of an aircraft in service.