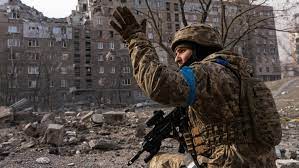 LONDON: The UK has today (13 December) announced a new package of 16 sanctions targeting senior Russian commanders for their involvement in the Russian military, and Iranian businessmen and officials involved in the production and/or supply of drones to the Kremlin.

The announcement comes as Russia steps up its campaign of terror against Ukraine, striking at crucial energy infrastructure and plunging its people into the dark and freezing cold of winter.

Twelve senior commanders of Russian military forces, including units implicated in attacks on Ukrainian cities, have been sanctioned. Major General Robert Baranov, identified by a Bellingcat investigation as the commander of a unit responsible for programming and targeting Russian cruise missiles, is among those targeted.

More than 6,000 Ukrainian civilians are estimated to have died since the beginning of Russia’s invasion, primarily as a result of Russian missile and artillery strikes. Intentionally directing attacks against civilians and civilian objects is a serious violation of International Humanitarian Law – those responsible must be held to account.

Iranian-manufactured drones have played a central role in these evil attacks on civilians. On 9 December, the US released information showing Iran has become one of Russia’s top military backers, sending hundreds of drones to Russia in violation of its international legal obligations, which have been used to attack Ukraine’s critical infrastructure and kill civilians.

The UK stands with Ukraine. Russian forces’ calculated attacks on cities and innocent civilians in Ukraine will not go unanswered.

The Iranian regime is increasingly isolated in the face of deafening calls for change from its own people and is striking sordid deals with Putin in a desperate attempt to survive.

The Iranian regime’s brutal repression of its own people and the threat it poses in the Middle East have left Iran isolated internationally and in desperate need of support from Putin. Today’s sanctions include individuals facilitating the production of these drones, including the co-owner and Managing Director of MADO, the company responsible for manufacturing engines for the drones which have been used by Russia in Ukraine.

UK sanctions are taking the wheels off the Russian war machine and forcing its military to compromise on vital weaponry and equipment. Defence Intelligence reports suggest that Russian armed forces are struggling to replenish their missile reserves, while they are increasingly forced to rely on second rate drones supplied by Iran to keep up their inhumane bombardments of the Ukrainian people.