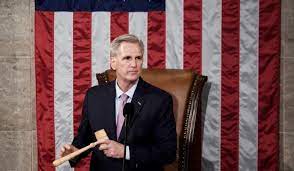 WASHINGTON (AFP): Divisive new Speaker Kevin McCarthy faces the first test of his ability to lead the chaotic US House of Representatives Monday as Republicans seek to approve a rules package determining how they will govern.

An evening vote on the blueprint — which has caused alarm over its concessions to the Republican right — comes on the heels of one of the most turbulent weeks ever in the lower chamber of Congress.

Lawmakers almost came to blows in the newly Republican-controlled House as McCarthy was forced to go through 15 rounds of voting over four days to overcome a far right blockade to his candidacy.

Democrats complain the deals he cut to swing the vote have severely curtailed the role of speaker — Washington’s top legislator — and have ceded power to the Republicans’ most extreme lawmakers.

A publicly available 55-page rules package lays out Republican priorities for the remainder of Democratic President Joe Biden’s term and the operating procedures the party will adopt.

One of the headline measures is a panel to investigate the “weaponization of government” that is expected to zero in on the Justice Department’s investigations into former president Donald Trump.

The package also allows a single member of either party to force a vote to oust the speaker, an insurance policy that right-wingers will use to hold McCarthy’s feet to the fire.

And it requires the House to hold votes on a variety of right wing priorities, such as withdrawing $72 billion in agreed funding for income tax enforcement, and a ban on taxpayer-funded abortions.

McCarthy can afford to lose four of his lawmakers at most, assuming every Democrat votes against the package, but it is expected to pass since only two Republicans are publicly opposed.

Yet McCarthy’s most controversial concessions remain clouded in mystery, as they were negotiated off the books with the far right House Freedom Caucus and aren’t in the official package.

“We don’t know what (conservatives) got or didn’t get. We haven’t seen it,” one of the two Republican dissenters, South Carolina congresswoman Nancy Mace, told CBS on Sunday.

“We don’t have any idea what promises were made or what gentleman’s handshakes were made.”

McCarthy has agreed for example to give the Freedom Caucus outsized sway over the day-to-day handling of legislation, according to US media, ceding significant leadership powers to the right flank.

Even more controversial is a pledge for talks with conservatives on taking up a 10-year budget that freezes spending at 2022 levels.

This would mean slashed funding for federal agencies — and a likely 10 percent decrease in defense spending.

“This has a proposed billions of (dollars) cut to defense, which I think is a horrible idea,” Texas Republican Tony Gonzales told CBS on Sunday.

“When you have aggressive Russia and Ukraine, you have a growing threat of China in the Pacific… how am I going to look at our allies in the eye and say, I need you to increase your defense budget, but yet America is going to decrease ours?“

Jim Jordan, a McCarthy ally despite being part of the Freedom Caucus leadership, told Fox News that “everything has to be on the table,” including funding for Ukraine’s fightback against Russian invasion.

“Frankly, we’d better look at the money we send to Ukraine as well and say, ‘How can we best spend the money to protect America?’” Jordan said.

The cuts would delight many fiscal conservatives, except that they are largely symbolic since they would be dead on arrival in the Democratic-controlled Senate.

The upper chamber can bounce back House legislation with tweaks if it has objections, triggering compromise talks between the two sides of Congress.