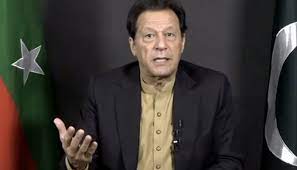 LAHORE (INP): Chairman Pakistan Tehreek-e-Insaf (PTI) Imran Khan has claimed that the former Chief of Army Staff (COAS) General (Retd) Qamar Javed Bajwa assured the Pakistan Muslim League-Nawaz (PML-N) leader Khawaja Muhammad Asif of victory during the no-confidence motion.
In an interview on Monday, he claimed that the plan to assign PM office to Shehbaz Sharif and remove his federal government was finalized earlier. Imran Khan alleged that former envoy to United States Hussain Haqqani was also hired to portray him anti-American and a Central Intelligence Agency (CIA) official was also working with Haqqani in this regard.
He further said that he used to trust former COAS Gen Bajwa, adding that his last meeting with former army chief was held in August 2022. “Gen Bajwa assured [PML-N leader] Khawaja Asif of victory at time of no-confidence motion. Recalling the assassination attempt in Wazirabad, the former prime minister said that three bullets were taken from his right leg from the shooting. “I could not file my first information report (FIR),” he said, adding that the justice system was exposed in this whole scenario.
Imran Khan pointed out that a country cannot develop until there is rule of law, regretting that during Gen Bajwa’s tenure, the rule of law was destroyed in the country. He reiterated that Gen Bajwa was against accountability and did not consider corruption ‘bad’. “The former army chief gave NRO-II to the incumbent leaders as I was against to make a deal,” he added.
Imran Khan maintained that ‘immediate and transparent’ elections were the only solution to country’s current situation, adding that new elections would bring political and economic stability to the country. It should be mentioned here that Imran Khan was ousted as prime minister (PM) after success of the no-confidence motion against him moved by opposition parties.
As many as 174 votes were cast in the favour of a no-confidence motion against PM Imran Khan. This was the first time in the country’s history that an elected prime minister has been removed through no-confidence motion against him.